As Warren Throckmorton (amongst others) reports, Dr Robert Spitzer has asked to retract a paper he authored in 2003 examining the anecdotal reporting of almost 200 people who had been through an “ex-gay” programme. 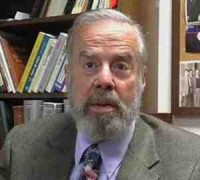 Knowing this article was coming, I talked last evening with Bob and asked him what he would like to do about his study. He confirmed to me that he has regret for what he now considers to be errant interpretations of the reports of his study participants. He told me that he had â€œsecond thoughts about his studyâ€ and he now believes â€œhis conclusions donâ€™t hold water.â€ He added that he now believes that the criticisms of the study expressed in the 2003 Archives of Sexual Behavior issue are â€œmore true to the dataâ€ than his conclusions were.

He told me that he had expressed these thoughts to Ken Zucker, editor of the Archives of Sexual Behavior several months ago. He wondered aloud to Dr. Zucker if there was some obligation to say the critics were right and that the study should be withdrawn. Although Spitzer said he did not recall Zuckerâ€™s exact reply, he did not feel encouraged to withdraw the paper.

Of course, reading the full piece that includes this interview with Spitzer we can see exactly what Spitzer said.

I asked about the criticisms leveled at him. â€œIn retrospect, I have to admit I think the critiques are largely correct,â€ he said. â€œThe findings can be considered evidence for what those who have undergone ex-gay therapy say about it, but nothing more.â€ He said he spoke with the editor of theÂ Archives of Sexual BehaviorÂ about writing a retraction, but the editor declined.

Now, read the bit in bold carefully. What Spitzer is saying is that a survey of anecdotes can provide you with anecdotes and nothing more. What Spitzer’s saying is this – his work from a decade ago isÂ useful for knowing what those who went through ex-gay programmes thought about what they had done, but it can’t be used to determine whether such self-perceived outcomes are actually true. Put in other words, Spitzer’s survey does tell us what people who went through ex-gay programmes thought about it, but it provides no qualified analysis as to whether the claims of change actually occurred.

This article in the Archives of Sexual Behaviour highlights some of the original critiques of Spitzer’s paper. These are,

The critiques can be summarised by this quote.

As Spitzer noted, self-reports are unreliable measures.Â Freund (1960, 1977) and Conrad and Wincze (1976), forÂ example, found that clientsâ€™ self-reports of favorable reorientation outcomes tended to be imprecise, deny certainÂ facts, and were not supported by objective data. SpitzerÂ seemed to believe that he has assessed sexual attraction;Â yet, he has only measured participantsâ€™ subjective experiences of their attractions.

Now what is the point of pointing this out? Well for a while I have been emphasising that anecdotal reports are not sufficient for validating ex-gay experience. What is really needed are proper academic studies like the Jones and Yarhouse Ex-Gay Study. There is also another reason for raising these issues, namely that there doesn’t exist a single report of “harm” from ex-gay therapy that doesn’t fall foul of the same kind of critique that was (rightly) levelled against the Spitzer paper. Harm reports tend to be anecdotal, taking no account of the type of therapy involved and have very poor qualitative qualifications of harm.

But it gets better. In a landmark paper in 2009, Professor Michael King produced a paper for BACP, a Systematic Review of Counselling for LGBT clients. He reported,

We found very few papers focusing onÂ psychotherapy for transgender people that were not solelyÂ concerned with preparing them for gender reassignment orÂ assisting them afterwards to adapt to their new gender role,Â but none had data suitable for inclusion in the review. OurÂ main finding is that the standard of quantitative researchÂ into the benefits of psychotherapy for LGBT people is poor,Â and there is no published evaluation of its effectiveness inÂ either experimental (randomised trials) or quasi-experimentalÂ (cohort of clients) research. Therefore, we could not conductÂ a meta-analysis of the quantitative data. The qualitativeÂ studies provided a rich literature on LGBT clientsâ€™ perceptionsÂ of therapy, the kinds of therapists they prefer, and how theÂ attitudes, training and methods of therapists can determineÂ outcome. However, many of the findings (eg need forÂ therapist acceptance and positive regard) did not seemÂ specific to LGBT issues and might be concerns for anyoneÂ entering psychotherapy.

What can we conclude from this? Quite simply, that anecdotal data isn’t normally valid for making useful qualitative assessments of therapy, but that goes across the board. Those who criticise “positive” research into ex-gay therapy tend to employ double-standards, for the same plumb-lines they measure such research by can be equally used to critique not only “research” into the “harm” of ex-gay therapy, but also gay-affirming therapies in general. As King’s 2009 paper rightly points out, there are real issues around self-selecting sample bias in most research in this field, and there are also concerns about how self-reporting anecdotal data is not reliable.