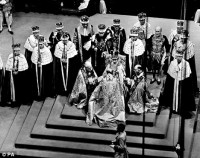 Three reasons why it’s good to have a monarch.

Receive this kingly Sword,
brought now from the Altar of God,
and delivered to you by the hands of us
the Bishops and servants of God, though unworthy.
With this sword do justice,
stop the growth of iniquity,
protect the holy Church of God,
help and defend widows and orphans,
restore the things that are gone to decay,
maintain the things that are restored,
punish and reform what is amiss,
and confirm what is in good order:
that doing these things you may be glorious in all virtue;
and so faithfully serve our Lord Jesus Christ in this life,
that you may reign for ever with him
in the life which is to come.Â Amen

Receive this Orb set under the Cross,
and remember that the whole world
is subject to the Power and Empire
of Christ our Redeemer.

Receive the Ring of kingly dignity,
and the seal of Catholic Faith:
and as you are this day
consecrated to be our Head and Prince,
so may you continue stedfastly
as the Defender of Christ’s Religion;
that being rich in faith
and blessed in all good works,
you may reign with him who is the King of Kings,
to whom be the glory for ever and ever.Â Amen.

Stand firm, and hold fast from henceforth
the seat and state of royal and imperial dignity,
which is this day delivered unto you,
in the Name and by the Authority of Almighty God,
and by the hands of us
the Bishops and servants of God, though unworthy.
And the Lord God Almighty,
whose ministers we are, and the stewards of his mysteries,
establish your Throne in righteousness,
that it may stand fast for evermore.Â Amen.

God save the Queen, and God raise for all to see on high the King of Kings.