The B&B Case that may well be a Christian Win

A piece in the Daily Mail yesterday caught my eye. 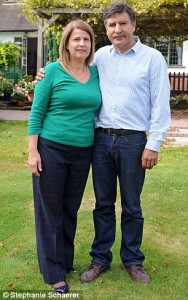 The house, called Uf Dorf, named after a village in Susanneâ€™s native Switzerland, has sweeping gardens leading down through a field to the River Thames, a lovely outdoor swimming pool, a vine-covered terrace for breakfast (weather permitting) plus two bright and very comfortable double rooms for Â£75-a-night, and one single, all en-suite.

Indeed, had Michael Black, 63, and John Morgan, 58, been allowed to check into the large downstairs double on Friday, March 19, 2010, they would doubtless have loved its bright airiness, the triptych of photos of the Swiss Alps above the lovely big double bed, the flat screen TV, the double doors opening on to the garden, the extensive and very generous tea and coffee-making facilities and the acres of clean linen and fresh towels.

But they never made it past the kitchen or the extract from Jeremiah (chapter 16, verse 19) stuck firmly to the fridge.

Because Susanne, 56, and Mike 58, are devout Christians and only allow married heterosexual couples to book into their double rooms. And Michael Black and John Morgan, who hail from Cambridgeshire and have been together for nearly ten years, are gay.

â€˜Iâ€™d had a booking from a Mr Black for the Zurich room â€” a nice big double with an en-suite,â€™ explains Susanne. â€˜And, naturally, I assumed it was for Mr and Mrs Black. But as I helped them manoeuvre their car into the drive, I realised they were two men and I thought: â€œOh dear, this isnâ€™t a situation I can go along with.â€â€‰â€™

So after inviting them into the kitchen (â€˜It felt rude to have this conversation outsideâ€™), and despite her website promising â€˜a very warm welcome to all visitorsâ€™, Susanne, a former airhostess and mother of four, told them politely and firmly that she was very sorry but theyâ€™d have to leave.

â€˜I said that because of my convictions, I could not go along with two men in the big double bed and I refunded their Â£30 deposit.â€™

This sounds oh so familiar and many in the media and blogging world are treating this as a case similar to the Bulls in Cornwall who lost when they were sued for discrimination. But this case is different because the Wilkinsons have a strict rule about only allowing married couples to share a double bed – they turn away heterosexual couples who are unmarried. On top of that, the complainants aren’t in a Civil Partnership so the key argument in the case of the Cornwall B&B, that Civil Partners have to be treated identically to married couples, isn’t applicable here.

A judge who is looking at this case and presented with the evidence is going to have to be very careful as to what ruling he makes. It seems to me that this situation is one where the Wilkinsons discriminate against unmarried couples per seÂ regardless of sexuality and therefore what they are doing is not illegal. Of course, the proof of that pudding would be their response if a couple in a Civil Partnership asked to have a room.