What’s that I hear you say? You want me to put my statistical analytical skills to work to predict the outcome of the Presidential Election in the USA on Tuesday? Why certainly!

I’m going to present you with two predictions because of a key factor in the opinion polls in the States, namely that of bias. One of the criticisms of a lot of the polls is that they are too biased towards the Democrats in that Democrat voters are over-weighted in the final outcomes. It’s a complicated argument and here’s a brief summary. Now you might say that giving two predictions is a bit of a cop-out, but if either of the predictions is correct on the night that itself will answer the question as to whether there is bias in how the polls are weighted.

To do the analysis I’ve looked at all the Real Clear Politics “Toss Up States” (i.e. those where the polls are close) and analysed the polls in each state, looking not only at the poll results but also the trend of movement towards voting on Tuesday. An additional adjustment is made to the polls for the second prediction equivalent to bringing the weightings of voters in line with the 2008 election results. Each State is then allocated to the candidate with the highest projected vote, even if that’s just by a whisker.

I’ll update this post at various points over the next 60 hours as more polls in the key states come in, so by the time we all settle down in front of the TV on Tuesday evening you’ll have my final prediction.

So, on with the show.

The Polls are not Biased 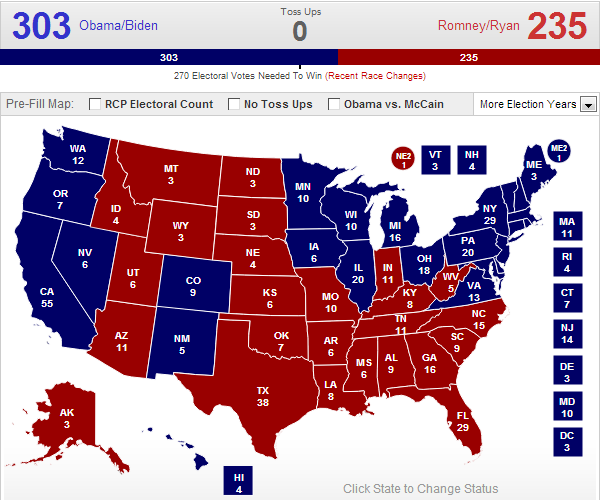 There is no change in this prediction from last night. If the polls are correct Obama will take Ohio, Virginia and Iowa and secure a second term.

The Polls are Biased 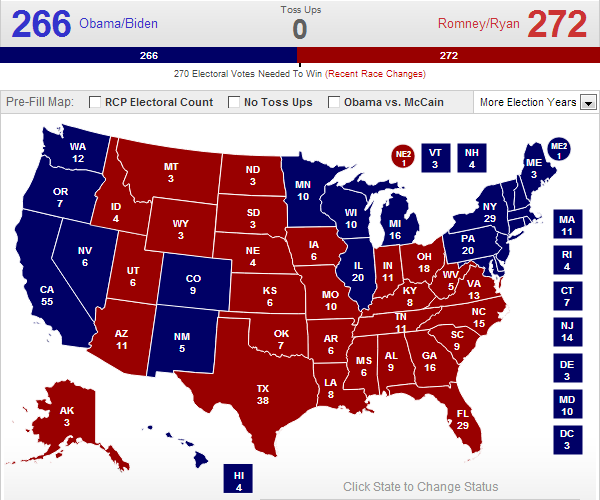 Our prediction based on the assumption that the polls are biased shows Romney picking up Ohio again but losing Colorado and Michigan to Obama. In this scenario Romney would win a narrow victory of just 6 Electoral College votes.

4 Comments on “Predicting the USA”