This is aÂ really interesting piece in the Daily Mail. 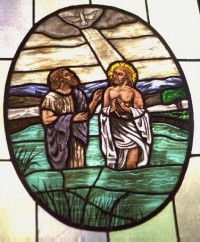 A lesbian couple claim they have been told they cannot baptise their one-year-old son because they both want to be registered on official records.Â Aimi and Victoria Leggett said they wanted to give their child, Alfie, a similar religious upbringing to their own but were told the child could only have one mother.Â As a compromise, a vicar told Aimi, 25, and Victoria, 22, one of them could be registered as ‘godmother’ instead.Â But the couple stormed out of the meeting at St Mary’s Church in Warsash, Hampshire, after Reverend George Gebauer said the church baptism register only had one space for one mother and one father.Â The church is where Aimi – Alfie’s biological mother – was baptised and where her parents got married.

The couple, whose civil partnership was in October 2011, said they had organised the Church of England ceremony with Reverend Andy Norris.Â But Mr Norris has recently left the parish, and retired clergy – including Mr Gebauer – are now officiating until a replacement can be found.Â Aimi, from Gosport, said: ‘There was no way one of us was going to be listed as the godparent. We are both Alfieâ€™s mum.Â ‘Rev Gebauer sat there and told us no child could have parents of the same sex, no child could have two mothers.Â ‘He did all this for about ten or 15 minutes and was asking us why we want Alfie brought into the church.Â Aimi added: ‘Iâ€™m baptised Church of England, and Victoria is a Catholic. We want him to be brought up the same as we were.

‘We were even saying to the Reverend, “Do you want Alfie to be ashamed of his family?Â ‘He’s not gay, we are, what we do is up to us.”

The pair still hope to have Alfie baptised at St Peterâ€™s Church in nearby Titchfield.Â But Victoria admitted: ‘Itâ€™s so hard not to be put off by our experience.Â ‘You get told “yes” you can do it and then it all changes and they completely disregard it.’Â Mr Gebauer, 87, said he did not refuse to baptise Alfie, and the coupleâ€™s sexuality was not an issue.Â He said he was willing to carry out the baptism if Aimi and Victoria agree to record just one of them as mother.Â ‘We have bent over backwards to try and accommodate this family,’ he said.Â ‘We suggested time and again that the natural mum be registered as mum.Â ‘They will not give way and that canâ€™t happen.The church baptism register makes no provision for it.Â ‘We can only make sure the child is theirs. For all we know it they may have pinched the child.Â They said they wanted a private service, away from the congregation, and with no other babies. We agreed to that.Â The couple are not even from our parish, so we could have informed their local church and directed them there instead.Â But we kept quiet and agreed to welcome them in.Â However, when it came to the administrative side of things they insisted on both being listed as mum and refused to budge from their position.

‘I told them I was unable to do this because the church baptism register only has space for one mother and one father. I believe it would be illegal for me to register them both as mother.Â They will find themselves in the same situation if they go to another vicar or church.Â ‘This is nothing to do with their sexuality. At no point did they say they were a couple – it was just assumed.Â The soul of the little boy is more important than anything else.Â We did not even push them for the name of the father, we were happy to leave that space blank. We have found ourselves at a stalemate.’

He added: ‘I feel sorry for gay and lesbian people. We know there is something not right within their make-up.Â They produce too much hormone – they’re imbalanced. That’s the way they are. It’s a medical issue.Â Surely baptising the child is more important than being registered. They only think of themselves it seems.’

Controversial last paragraph there, but then he is 87. But on the wider issue, it is an interesting point as to whether baptism forms do allow for two mothers or fathers. I’m not sure that they do. That said, looking through the Common Worship liturgy I’m not sure I can find any problem per se with two mothers bringing a child to baptism. The rubric (as in the Canons) is constantly of “parents” not “mother and father”.

Looking at the legislation involved (see Richard’s useful comments below) I think there are two options re the register are as follows.

Would welcome some legal opinion on this!

28 Comments on “Mother and Godmother”