Now, you know me. I’m not the one for waving around lurid statistics about death rates amongst gay men or the incidence of STDs in various sub-groups. In fact, I’m on record for criticising those who seem to constantly do nothing but that.

Look at this slide that has come from a CDC (Centers for Disease Control and Prevention) presentation on HIV prevalence amongst young males. 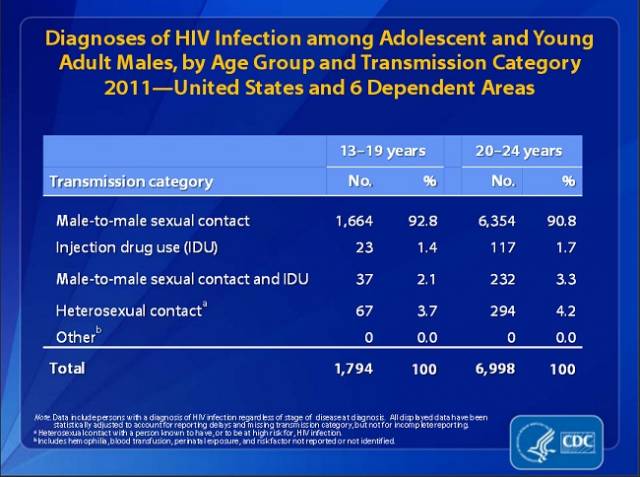 Now I want to help you to get your head around this. In the USA, 91.2% of all HIV infections in young men aged 13 to 24 are amongst those men having male to male sexual contact (with no other aggravating factors like needle use) and only 4.1% from men having sex with women. If we assume the Kinsey figure of 1 in 10 people being “gay”, then that means that a young gay man isÂ 222 times more likely to get HIV through his sexual activity then someone who doesn’t have sex with someone of the same sex. But of course, the Kinsey figure is way too high, so let’s apply the more reasonable figure of 2% of the population being homosexual. Now the factor isÂ 1,112 times more likely to acquire HIV if you have sex with someone of the same sex.

I’m lost for words. How does one go about fixing this? Is it a case of better sex education, better information about preventing STD transmission or something else? Someone tell me.

56 Comments on “Some Staggering Statistics”