This is aÂ really interesting study into the effect of gay parenting on children because the sample is not one of convenience but comes straight off the Canadian Census returns. You can read the full paper here.

Let’s look at the model that was built. 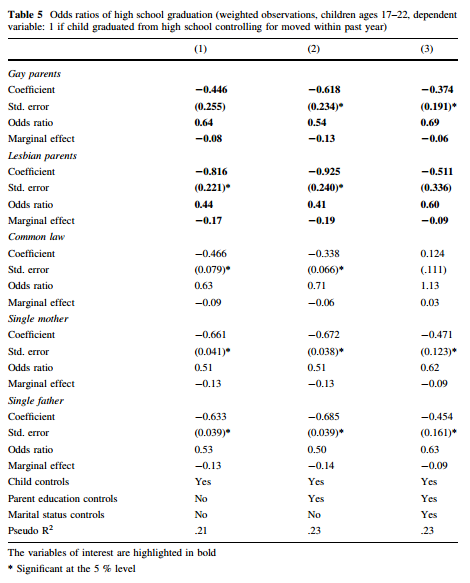 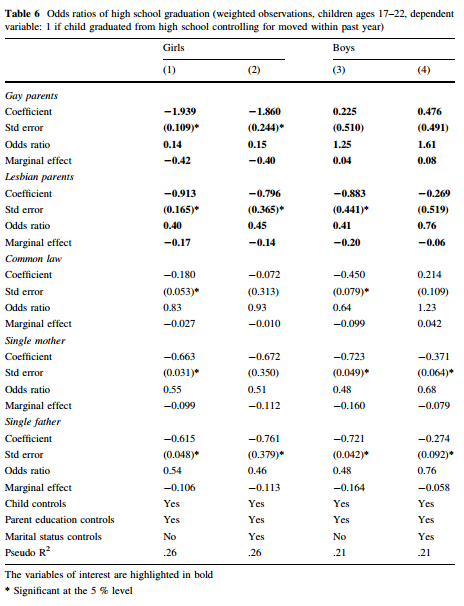 Table 5 reports on three logit regressions, where the dependent variable equals 1 ifÂ the child has graduated from high school. All of the regressions in this tableÂ control for whether or not the family moved with the past year. Table 8 in theÂ appendix reports on another three logit regressions with the same dependentÂ variable and the same right hand side variables, except for the variable used toÂ control for family mobilityâ€”it uses the mobility measure â€˜â€˜did child move withinÂ past 5 years.â€™â€™ There is no qualitative difference in the estimates when using theÂ different mobility controls.

Table 5 only reports the logit coefficient, its standard error, the odds ratio, andÂ marginal effects, for the household type variables in order to keep the tables aÂ reasonable size. The log of the odds ratio is the logit, which is a linear combinationÂ of the parameters and exogenous variables. The odds ratio is found by taking theÂ exponential of both sides of the logit equation. The odds ratio has the nice propertyÂ of an easy interpretation. The marginal effect equals (qy/qx), where y is theÂ graduation rate and x is one of the right hand side variables.Â The different columns result from different types of controls. Column (1)Â includes controls for child characteristics, and these include: province, visibleÂ minority, disabled, mobility, urban, age, family size, family income, female, andÂ same race. Column (2) adds the parental education controls: did the mother/fatherÂ graduate from high school, and did the mother/father have a graduate degree.Â Column (3) adds the parental marital status variables found in Table 2.Â Before examining the results of Tables 5, some comment on the unreportedÂ results is warranted. Among the child characteristics, being disabled or havingÂ moved in the recent past reduces the odds of graduation (on average, to about 50 andÂ 75 % respectively). Living in an urban area, being female, and having all familyÂ members the same race raises the odds of graduation (on average, by 30, 60, andÂ 35 % respectively). Parental education matters a great deal: if the parents haveÂ graduated from high school, the child is almost twice as likely to do so. Finally,Â marital history has the expected effects. Any marital disruption reduces the odds ofÂ a child graduating from high school. For any given household type variable theÂ odds ratio and level of statistical significance is generally robust to the differentÂ specifications. That is, changing the controls does not change the parameterÂ estimates for the association of graduation rates and household type in large ways.

Table 5 shows the associations between family type and child graduation. In allÂ cases, the odds of a child with gay or lesbian parents completing high school areÂ lower, by a considerable margin, compared to children of married opposite sexÂ parents. For gay and lesbian households, adding the parental education controls toÂ the base controls lowers the odds of a child graduating for same-sex families. This isÂ because gay and lesbian homes are characterized by high levels of parent educationÂ which contributes to child graduation, and so conditional on this the odds of a childÂ graduating are even lower. When all controls are used, including those for parentalÂ marital status, the conditional graduation rate odds ratios are reasonably similarÂ between the two types of same-sex couples: 0.69 for gays and 0.60 for lesbiansÂ using the 1 year mobility measure. The difference between the two point estimatesÂ for gay and lesbian parents in column (3) is not significant. To put this in anotherÂ context, the marginal effect on the probability of graduating for children of samesexÂ homes is a reduction of approximately 6â€“9 % points. The point estimates forÂ gay households are always statistically significant at the 5 % level, but the estimateÂ for lesbian households in column (3) is not.39

Table 6 repeats the column (2) and (3) regressions of Table 5, but this timeÂ separating girls and boys. This table shows that the particular gender mix of a sameÂ sex household has a dramatic difference in the association with child graduation.Â Consider the case of girls first. Regardless of the controls and whether or not girlsÂ are currently living in a gay or lesbian household, the odds of graduating from highÂ school are considerably lower than any other household type. Indeed, girls living inÂ gay households are only 15 % as likely to graduate compared to girls from oppositeÂ sex married homes. In all cases for girls the estimates are measured with precision.Â The point estimates for boys are considerably different. Looking at equation (4) inÂ Table 6, boys in lesbian homes are 76 % as likely to graduate, while boys in gayÂ homes are 61 % more likely to graduate compared to boys in opposite sex marriedÂ homes. However, none of these estimates are statistically significant. The results fromÂ Table 5 mask this gender difference, and the significant effect found in Table 5Â column (3) for gay households is clearly being driven by the strong daughter effect.

The different results for the household gender mix are fascinating, especially sinceÂ this difference is not found in single parent households. Table 6 shows that boys doÂ better than girls in single parent homes, but the difference is not nearly as pronouncedÂ as in same sex households. Looking at the unconditional graduation rates (withÂ standard errors in parentheses) for gay households, sons achieve 0.72 (0.074), whileÂ daughters achieve 0.43 (0.090). For lesbian households, sonâ€™s graduation rates are 0.48Â (0.060), and daughterâ€™s have 0.55 (0.055). Based simply on these unconditionalÂ measures, sons do better with fathers, and daughters do better with mothers.Â At this state, such a result is an interesting empirical finding, and one worthy ofÂ further investigation. On the one hand, it seems this result is inconsistent with anyÂ type of discrimination theory for the lower graduation rates among children ofÂ same-sex households. Or, a discrimination theory would have to be modified toÂ include the household gender mix. Within the child development literature and popÂ culture, there is the belief that mothers and fathers provide different parenting inputs Â that are not perfectly substitutable. These results would be consistent with thisÂ notion, but further research is necessary to show any causality.

It’s worth pointing out that Potter did some similar research and also looked into family transitions. He found that once you included those, same-sex parenting became less significant in explaining differing educational outcomes of children. That said, Allen’s research is hugely significant because it has an enormous same-sex parenting sample (over 8,000 compared to 248 for Regenerus) and also the nature of that sample avoids many of the previous problems for research in this area.

Currently, the 2006 Canada censusÂ has several strengths compared to any other data set. First, it uses information fromÂ a country where same-sex couples have enjoyed all taxation and governmentÂ benefits since 1997, and legal same-sex marriage since 2005. As Biblarz and SavciÂ note, such legalization reduces the stress and stigma of homosexuality, andÂ encourages honest participation in census questions. Second, not only does theÂ census provide a large random sample, but married and common law same-sexÂ couples and their children are self identified. This is an important advantage overÂ the US census. Third, because the child and parent records are linked together, theÂ marital status and educational levels of the parents can be controlled for whenÂ analyzing child performance. Finally, because of the relatively large sample size,Â there is enough power to not only separate gay from lesbian households, but alsoÂ enough to examine the gender mix of same-sex households.

Simply put, it’s hard to argue with this research without impugning the whole Canadian Census programme. From that census we have a robust piece of research suggesting that children of same-sex parents are c. 10% less likely to graduate from high school than children of married couples.