You wait ages for a study on gay parenting to come and then loads appear round the corner at once.

Daniel Potter has published a paperin the Journal of Marriage and Family examining the issue of gay parenting from the perspective of academic gain in early years education. By using data from theÂ Early Childhood LongitudinalÂ Studyâ€”Kindergarten cohort Potter was able to examine various educational gain during the first few years of a child’s school life and see if there were any differences related to family setup. It’s an interesting study and has challenging outcomes. Here’s Potter’s description of what he did.

In this study, I used a dynamic model of theÂ family to explore the importance of the timingÂ and accumulation of family structure transitionsÂ for shaping childrenâ€™s academic achievementÂ in same-sex parent households. Specifically,Â I addressed two research questions: (a) WhatÂ is the association between living in a samesexÂ parent family and childrenâ€™s academicÂ achievement as measured by their mathematicsÂ assessment scores and (b) how does thisÂ association compare with the outcomes ofÂ children from other nontraditional families? ToÂ answer these questions, I applied a hierarchicalÂ linear modeling (HLM) growth curve model toÂ data from the kindergarten through eighth-gradeÂ waves of the Early Childhood LongitudinalÂ Studyâ€”Kindergarten cohort (N = 19,043) andÂ examined the association between living in aÂ same-sex parent family (n = 158) and childrenâ€™sÂ math assessment scores.

Got that? The idea is to build models that look at family setup as impacts on child educational attainment. 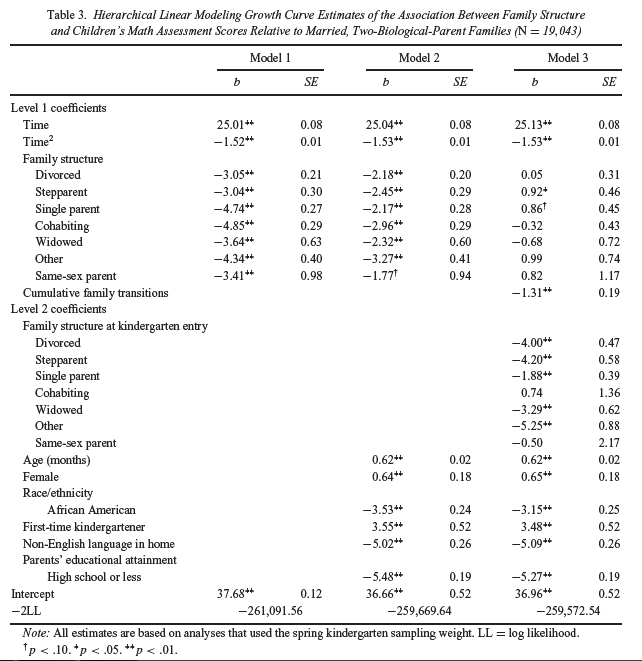 The first models were simple regressions against outcome, looking at various input factors. Model 1 simply regressed family setup at kindergarten entry to mathematics outcome at eighth grade. The outcomes are very clear – every single family setup that isÂ not the biological parents produces poorer outcomes for mathematics for their kids. Same-sex parents perform slightly worse then divorced parents or step-families but not as bad as single parents or co-habiting parents. Model 2 introduces factors such as age and sex of parent, race, parents educational attainment etc. Now the coefficients for family setups are not so powerful. In particular the same-sex family coefficient halves and moves out to a significance level ( 0.05 < p < 0.1) where we would probably reject it in a confidence test. Finally in the third model cumulative family transitions are included and suddenly most of the non “nuclear family” setups become insignificant.

What does this tell us? Potter describes theÂ phenomenonÂ perfectly.

Differences in academic achievement associatedÂ with living in traditional and non-traditionalÂ families are largely reflective of the transitionsÂ and changes that accompany the formation ofÂ such households and less clearly indicativeÂ of any inherent deficiencies in these familyÂ structures. On the basis of the findings presentedÂ herein, the academic achievement of childrenÂ living in same-sex parent families conformsÂ to this pattern, in that baseline disparities inÂ childrenâ€™s assessment scores were accounted forÂ by the transitions that children experienced.Â These results contrast with those of earlierÂ studies that found no evidence of worseÂ performance by children in same-sex parentÂ families, even at a baseline level (Bos et al.,Â 2007; Gartrell & Bos, 2010; Wainright &Â Patterson, 2006, 2008; Wainright et al., 2004),Â but the dynamic model of the family used in thisÂ study aligns these results with other researchÂ on opposite-sex parent nontraditional familiesÂ (Cavanagh et al., 2006; Fomby & Cherlin, 2007;Â Sun&Li, 2009, 2011). Same-sex parent familiesÂ are often created through a series of changes toÂ and transitions in childrenâ€™s family structure;Â therefore, the view of the family incorporatedÂ into this study provides a more realistic accountÂ and reflection of the experiences of theseÂ children (Stacey, 2006; Telingator & Patterson,Â 2008). Nonetheless, not all same-sex parentÂ families are created from dissolved opposite-sexÂ relationships, and other research, in particular,Â the U.S. National Longitudinal Lesbian FamilyÂ Study, continues to offer invaluable informationÂ regarding the outcomes of children in same-sexÂ parent families and the benefit that a consistentÂ family structure can have on the development ofÂ children regardless of parentsâ€™ sexual orientationÂ (Gartrell & Bos).

These are challenging findings for conservatives but they need to be taken seriously. Any differences between nuclear families and same-sex families on mathematical achievement of children are down to family structure transitions andÂ not the fact that the alternative family is gay. Kids in gay families still perform worse than kids in nuclear families, but they perform no worse then any other child in another kind of non-nuclear family. This finding is confirmed by repeating the models with same-sex families as the base structure, not nuclear families. It is not having a mother and father that is important, it is having the same mother and father today that conceived you that is the magic factor in educational attainment.

Now, the usual caveats apply – this study would need to be repeated several times to be confirmed, and the data doesn’t tell us whether same-sex parents are likely to have more unstable family setups (leading to more family structure transitions) then other non-nuclear families. But what is important is that, unlike the Regenerus Study, Potter went to great lengths to ensure that the “gay families” he studied were proper monogamous stable couples. In that sense this is a better study then Regenerus, but it still delivers the same broad outcome, that children in gay families have poorer attainment then those born in nuclear-families, but no different then other non-nuclear families.