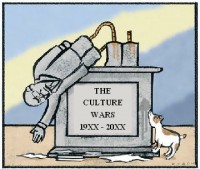 For the last few weeks I’ve become increasingly aware of the way certain parts of the Conservative Church are obsessed with fighting a culture war that we have already lost, at the expense of the Gospel.

It shouldn’t come as a surprise to anyone that this is so. We have websites that seem to publish link after link to stories that criticise the evils of modern lifestyle choices. We have organisations that fight tooth and nail for the right of Christians to refuse business to people they don’t like.And alongside this, the same people seem unable (or unwilling) to speak out when the people who they oppose are themselves victimised and treated in an inhumane way.

Want an example? At the moment one of the leading UK organisations campaigning against abortion is asking its members to lobby against an EU report on homosexuality. Really? What the heck has homosexuality got to do with saving babies’ lives? Seriously? Or how about the American website that is complaining about the UK Government daring to support groups in Russia planning to protest against the new law there that Â makes it difficult for gay advocacy groups to do little more than exist. The same site doesn’t have anything to say about the Russian court who found three men guilty of a homophobic murder. Or what about the group that runs conferences on pastoral support for gay people that includes graphic details about the dangers of anal sex as though that were the defining act of male homosexuality, despite the fact that two-thirds of gay men don’t engage in it, let alone lesbians. And yes, I get emails from gay men who wonder why some Christians seem obsessed with finding every example of something bad about homosexuals and plastering it all over the internet whilst never recognising those gay men and women who are monogamous and don’t engage in any form of “dangerous” sexual practice.

Why are we still fighting this culture war? In most of Western Europe it is pretty well over – the majority of countries have implemented marriage reform recognising same-sex unions and even historically deeply conservative nations like Spain have gay weddings recognised by the State. The vast majority of citizens take a laissez-faire approach to sexual morals, pretty well agreeing that what people choose to consent to in their bed is their own business. Even a majority in the UK now think gay marriage is a good thing.

Yet despite this some Christians want the world to be like it was 100 years ago, when Christendom ruled and sexual morals (and the laws around them) were largely based on the Bible. They want the right to turn down people in their businesses just because they have different choices of sexual activity than they do (but they happily buy their shopping from the sinners down the road). They want to be able to refuse to officiate at same-sex unions even when they are employed by the State as a registrar, but at the same time they fight tooth and nail in court if an employer refuses to allow them to wear a sign of their faith.

This evening I read through the whole of the Acts of the Apostles. In a 1st Century environment that had (several) cultural morals opposed to the revelation of God to his people as to how he wanted them to live, the task of evangelism never saw the Apostles telling the pagans that their sex livs were obscene and dangerous, or that they should be locked up. Neither did the first martyrs complain bitterly about their rights being taken away by a vociferous lobbying minority. No, instead the early Church preached Jesus crucified, dead, risen and ascended as Lord of the Universe and saviour to all. They weren’t concerned by telling the heathens about their individual sins, instead they were concentrating on the far wider issue of how all sin (not just again and again going on only about the ones they found particularly offensive) alienates us from God and means that we are destined for hell without a Saviour.

That’s what they did in a world that had turned its back against God and it worked wonders. When the emphasis was Jesus, not groins, the Church grew exponentially as the transforming power of Christ at work in his people turned the world’s biggest empire upside down. The only time the Apostles dealt with sexual sin was when they were talking to the converted, telling them how to live a life of holiness worthy of the one who had redeemed them. The early converts weren’t converted through a poster campaign promoting a sexual minority or a blog post recounting all the possible illnesses you could get by sticking one sexual organ in another orifice, instead they were enraptured by a community of outcasts who loved the unlovable and told people how a man from Galilee who was God could change their lives forever and set them free from the guilt and shame that persuaded them for their whole lives.

Really, we might. We just might. If the Church concentrated simply on sharing Jesus even when the heathen lock us up for doing so, and spent its its resources on helping disciples live lives of Godly witness rather than complaining about the unGodly existences of others, we might just have a greater impact.

We’ve lost the culture war – can we now please just get on with winning people for Christ? After all, it worked the last time we were in the same situation.