Ian Paul on how Steve Chalke reads the Bible 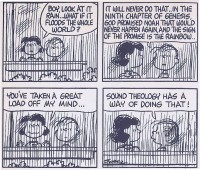 When trying to make sense of any text in relation to our knowledge of God, there are at least four levels of thinking we need to engage with:

1. The text itselfâ€”what it says, and what it means in its context. (This is usually called exegesis.)

2. The whole range of issues about the textâ€™s interpretation, that is, how we as 21st-century readers might understand it from our very different social and historical context. (This is usually called hermeneutics.)

3. How, once we have understood the text and how we make sense of it, this text contributes to our understanding of who God is and what we might try to say about God. (This is called theology.)

4. What the implications of all this are for how we try and live our lives as disciples. (This is called ethics).

The real difficulty with Steve Chalkeâ€™s approach is that he appears to be unaware of the distinction between these different stages, and in the conversation he was constantly collapsing them down into one processâ€”you read a text in your Bible, and this immediately tells you something about God, right or wrong. The key moment in video 2 came at about 13 mins 30 s:

Wilson: Yes he did

Chalke: I think that is an appalling misrepresentation of who God is.

Chalke seems to think that Wilson, in answering his question, is dealing with level 3: what can we say about God? In fact, Wilson was answering a level 1 question: what can we say about this text? Wilson does go on quite quickly, perhaps too quickly, to do the level 3 stuff, in commenting â€˜When God does things, no-one has the right to shake their fist at himâ€¦â€™ (at which point he is interrupted by Chalke). But he certainly does not express the extreme end of the spectrum in view 1, as Chalke appears to accuse him of.

Now this raises some key questions about â€˜ordinaryâ€™ and â€˜expertâ€™ reading of Scripture. Chalke is no academic, as is made clear by his constant mispronunciation of â€˜Hammurabiâ€™, â€˜cuneiformâ€™ and â€˜Codex Sinaiticus.â€™ (This is, perhaps, a reminder that a little knowledge is a dangerous thing.) But does that mean he does not have something to say? Are academics and scholars the only ones allowed to comment on these issues? Surely notâ€”but those who do get involved in the debate need to be aware (as Steve Holmes highlights) that there has been a long discussion happening for many years.

If reading the Bible is like driving a car, then the academics are like the mechanics who have been doing maintenance work understanding how the thing is running. Anyone who is concerned that the car is not running well has the right to pull over and open the bonnetâ€”but if you ignore the manual or the mechanic, then donâ€™t be surprised if the process is a bit confusing or frustrating.Â For me, the problem with Steve Chalkeâ€™s approach is that he is asking Sunday School questionsâ€”and expecting them to be resolved by Sunday School-type answers.Â A classic case was when he mentioned the contradiction in the account of Davidâ€™s taking a census in 1 Chronicles 21Â and 2 Samuel 24. â€˜You see? It just shows that the Bible writers are inconsistent!â€™ as if that proved his case. At this point Wilson looked like he was about to explode!

The end of this discussion was the most revealing. If the writer of Numbers was mistaken, asked Wilson, then what about the other writers of the Bible? What about Ananias and Sapphira in Acts 5? If God does not strike people down, what was going on there? Yes, said Chalke, the author of Acts was also mistaken. As of course was Paul (or whoever) in 1 Timothy 2. So it is not just a case of â€˜progressive revelationâ€™; any and all of the Bible authors can be mistaken. On what basis? On the basis of the revelation of Jesus as the personification of the love of God. The big question, then (which was not asked in these terms) is:Â If any of the New Testament writers could also be mistaken, on what basis can we know anything about this Jesus?

I am not here attempting to offer a value judgement about what Steve is doing, just locating him on the map. When he says â€˜The Bible is mistaken in attributing the actions to God that it doesâ€™, he really is saying that the Bible is an unreliable witness to the truth about Godâ€™s will, actions and intentions, much in the same way that Strauss, Schleiermacher and Harnack did. To that extent, he represents a position that most evangelicals have been working against for the last 200 years.

Sounds about right. Steve Chalke, like Rob Bell, asks all the right questions but gets the wrong answers because, ironically, he actually wants to dumb down theology and avoid grappling with tough issues.