The Parable of the Gay Samaritan

Archbishop Cranmer rather nails it on the World Vision story.

On one occasion an expert in biblical ethics and Christian standards of sexual morality stood up to test World Vision. â€œChief Exec,â€ he asked, â€œwhat must I do to sponsor an impoverished child in the proper Christian way that is honouring to God in accordance with His Word?â€

â€œWhat is written on our website?â€ he replied. â€œHow do you understand it?â€

He answered, â€œâ€˜Our Christian identity underpins everything that we do. Motivated by our faith, World Vision is committed to following the teaching and example of Jesus Christ in his identification with those who are poor, vulnerable or forgottenâ€™; and, â€˜Just 75p a day can free a child from the fear that poverty creates. Sponsorship keeps children protected and provides them with clean water, nutritious food, healthcare and education â€“ everything a child needs to enjoy their childhoodâ€™.â€

â€œYou have answered correctly,â€ the Chief Exec replied. â€œDo this and the malnourished, diseased, trafficked and enslaved children of the world will live.â€

But he wanted to justify himself, so he asked the Chief Exec, â€œBut what if one of your employees is gay and in a civil partnership? You see, I read in Christianity Today that you’ve changed your conditions of employment and now accept married gay dudes, who aren’t actually married, you know, in God’s eyes, but you say that abstinence outside of marriage remains a condition of employment, so how does that work?â€

In reply the Chief Exec said: â€œA six-year-old starving boy and eight-year-old trafficked girl were going down from Djibouti to Hargeysa in Somaliland, when they were attacked by fanatical militia. They stripped the starving boy of his clothes, beat him, and then raped and mutilated the genitalia of the girl, and went away, leaving them both half dead. Justin Taylor of The Gospel Coalition happened to be going down the same road, and when he saw the children, he passed by on the other side. So too, Russell D. Moore, president of the Ethics and Religious Liberty Commission of the Southern Baptist Convention, when he saw the children lying there, he walked on by. And also Denny Burk, professor at the Southern Baptist Theological Seminary, when he came to the place and saw them, passed by on the other side.

But a gay guy in a civil partnership, as he travelled, came to where the children were; and when he saw them, he took pity on them. He went to them and gave them bread and water, and bandaged the girl to stop her bleeding, hugging them both to comfort them. Then he carried the weeping girl and put the boy on his own bicycle, and brought them to a World Vision shelter and took care of them. The next day he took out $100 and donated it to the charity. â€˜We must look after them,â€™ he said, â€˜and I’m happy to reimburse World Vision for any lost sponsorship you may have as a result of your employing me.â€™

â€œWhich of these do you think was a neighbour to the children who fell into the hands of the fanatical militia?â€

The expert in biblical ethics and Christian standards of sexual morality replied, â€œThe one who showed compassion and sponsored them.â€

Jesus told him in his heart, â€œGo and do likewise.â€

As a balance, here’s Ian Paul. 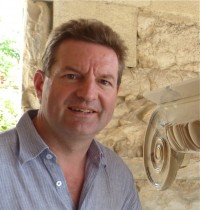 Clever as it is, I think this comment makes two inexcusable errors. First, the idea of naming these individuals and suggesting that they â€˜walked by on the other sideâ€™ is really hideous. In the comments, someone has asked â€˜Did you know thatÂ Justin Taylor has adopted multiple orphans? Hardly the most fitting to cast as the bad guy in this.â€™ I am not sure of the truth of this, but surely we cannot be accusing others of lack of compassion without knowing more about themâ€”and even then, is this the right thing to do?

Secondly, Jesus told the original parable to highlight the importance of action. But that did not stop him criticising the belief of the Samaritans in the sharpest terms.

Folks have been asking me what I actually think. Simply put, my position is that the Bible makes it very clear the standards of behaviour expected by a Church Leader. It doesn’t say what the standards of behaviour of an employee of a charity should be, especially if said employee doesn’t do any pastoral or teaching work. Frankly, what you do in your bedroom doesn’t affect your ability to do the accounts, but it does affect your ability to preach on what good Biblical accounting should look like.

19 Comments on “The Parable of the Gay Samaritan”