Peter Ould Posted on April 2, 2014 Posted in Church of England, Obituary No Comments 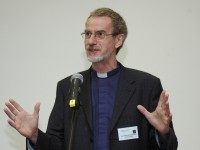 I met John first through his writings, while I was a vicar in Oldham. Get into the Bible (1994) was a brilliant overview of the Bible, from first creation to new creation, and introduced many to Biblical theology at its best. It was 1998, when I moved to be an incumbent in Chelmsford diocese, that I first met the lanky John face-to-face. It was the beginning of a lasting friendship and partnership in the â€˜proclamation and defence of the gospelâ€™. I can think of few people I have come to respect more than John.

The occasion was a few evangelical incumbents talking over a recent diocesan lay conference. It had been well-organised and drew large numbers, only â€œit could have been so much better and beneficial to the laity,â€ said John. â€œIf only it had had the Bible at its centre. Iâ€™ve a good mind to offer a similar residential conference where we put the teaching of the Bible at the heart of our diocese.â€ And that was the seed that bore fruit in the Chelmsford Anglican Bible Conference. Now in its fourteenth consecutive year and attracting over 350 regularly, CABC has been an inspiration and oasis at the heart of this diocese and has gained unashamed Episcopal support. It aims to give lay people joy and confidence in understanding, handling and using the Bible.

On that afternoon, Johnâ€™s friends knew that he was a visionary and a thinker, but that he would not have a clue how to organize the proverbial in a brewery. So we formed the committee, and CABC launched in 2000. Always with a first-class expositor and in the context of praise and prayer, there would be four talks giving an overview and introduction to a book or theme of the Bible, with further testimonies and illustrations of the power and value of the Scriptures in shaping and driving the Christian life in individuals or churches. High-points have been John Lennox on Genesis, Don Carsen on John, and (in anticipation later this year) Dale Ralph Davis on Joshua. John himself chaired the day in his own inimitable laconic style, almost a drawl, unless he was the speaker, as he was on two memorable years on the Pentateuch and Revelation, when he became energized and passionate.

John was a gifted teacher in the local church or further afield. He was in demand for church week-ends, conferences, and synods. As a Chaplain in North London for sixteen years and from 2000 imaginatively called by the then Vicar of Henham and Elsenham with Ugley, Dick Farr, to a post that gave time for research, writing and teaching, Johnâ€™s gifts blossomed. His students on The East Anglia Ministry (TEAM) course loved his work on Wisdom literature and his sardonic throw-away questions or images. He penned further incisive booklets on Bible books or issues: God, Sex & Marriage in 1 Corinthians 7 (1995, 1998) â€“ utterly captivating from a potentially eccentric bachelor, or Revelation Unwrapped (1996) â€“ Johnâ€™s favourite, or What God has made clean â€“ â€œif we can eat prawns, why is gay sex wrong?â€ (2003), and others on the Cross of Christ or Law and Grace. His five talks on God and Marriage at the St Peterâ€™s (Harold Wood) week-end last September were extraordinary for their cosmic and cultural breadth and his breath-taking, but witty and canny asides.

Johnâ€™s earlier years were shaped in part by Anglo-Catholic traditions, and he never lost his love and passion for the Churchâ€™s health and calling. But his theological grounding was evangelical. It was first outlined at St Johnâ€™s Theological College, Nottingham, and later, after the typically mixed Anglican experience of a confusing curacy and an unhappy foray into incumbency, crucially galvanized and cemented by a â€˜first-classâ€™ year at Moore College, Sydney. Johnâ€™s thinking and motivation never looked back as he wrestled with Scripture and its application to the pressures on life and faith in the world and in the Church. He was a champion of orthodox doctrine and practice, but his undoubted conservatism was never partisan or shrill. His mind was incisive and distinctive, disciple of no man or stable, but illuminating and visionary in â€˜the faith once delivered to the saintsâ€™. Temperamentally perceived to be somewhat melancholic and ill-at-ease, Johnâ€™s sharp humour and acute observations were seen at their best in the pulpit or lecture-room. No wonder he was appreciated most by those who were taught by him.

Bishop Stephen Cottrell of Chelmsford commended him as â€˜such a faithful servant of the Gospelâ€™. Bishop Pete Broadbent of Willesden wrote of John having â€˜a fine mind and a gift for articulating the Gospel in his blogâ€™ and being â€˜one of those rare conservative evangelicals in the CofE who actually appears to have grasped strategic action and foresightâ€™.

As CABC, John partnered and led in so many other initiatives. Chelmsford Fellowship of Confessing Anglicans (CFCA, originally CAM â€“ Chelmsford Anglican Mainstream) endeavours to bring conservative and charismatic evangelicals and traditional Catholics together in common Anglican orthodoxy. John served on the editorial board of New Directions for many years and was high-profile in trying to get evangelical parishes to go for â€˜Resolution Câ€™ while still available. John was instrumental is reviving the Diocesan Evangelical Association (CDEA) and a leading independent light in Reform Chelmsford. John was his own man. He could annoy his more Calvinist colleagues in his understanding of the relation of Law and Gospel and of gospel freedom. He could never sign the Reform Covenant as such because he focused the language of â€˜headshipâ€™ in marriage, not initially in ministry. His argument against Women Bishops was essentially that the innovation would at its best confuse and at its worst undermine the unique calling and complementarity of marriage. Nothing done in Church should confuse or compromise what happened in the home.

Perhaps Johnâ€™s most visionary and strategic writing was A Strategy that changes the Denomination â€“ Anglican Evangelicals, the Conversion of England, and the Transformation of the Anglican Church (2011, www.lulu.com). Drawing on William Templeâ€™s posthumous report in 1945 Towards the Conversion of England and on the Kenyan Bishop of Taita Taveta, Samson Mwaludaâ€™s Reorienting a Church for Accelerated Growth, John challenged Anglican evangelicals to lay aside their divisions and positions and to work together to develop a strategy which changes the whole denomination into an instrument for evangelism and bends the Church to the great task of (re)-evangelising the nation.

This came off the back of what John most enjoyed setting up in 2011 â€“ an annual conference to train up a new generation of younger clergy who would be evangelical and Anglican by conviction (JAEC â€“ Junior Anglican Evangelical Clergy, known affectionately simply as â€˜Jakeâ€™). John already had very many fans of his regular and compulsive blog as â€˜The Ugley Vicarâ€™. JAEC began to plan for succession. But John has now gone. He died suddenly on March 31st in the aftermath of an emergency operation to remove a brain tumour, and succession is uncertain. He leaves Alison, his wife of less than six years, and a generation of friends and colleagues bereft of partnership in life and love and in the gospel. But, for John, it is â€˜gone homeâ€™ to his rest and reward, a faithful servant of Christ, of the gospel, and of the Church, and an inspiring teacher of the grace of God and of the faith, hope and love of Christ.