Remember, the Simple Country BishopTM doesn’t want to be the "gay bishop". He just wants to get on with his job.

On Thursday, knowing that the conference attendees would leave early in the morning for London — for the MDG walk, lunch at Lambeth Palace, and tea with the Queen — it seemed like a good, low-profile time to make my own pilgrimage to our Mother Church. I told no one of my intentions to attend — except I had my security person follow the properly courteous protocol of alerting the Cathedral to my visit. I had him also seek permission for a videographer to accompany me on my visit for a documentary to be released sometime in 2010. We were informed that the videographer could NOT accompany me or film me inside the Cathedral. Fair enough. We were told that he could accompany me to the gate onto the Cathedral grounds, and, standing in the public street, could at least film me walking into the Cathedral through the gate’s archway.

So no publicity then?

And please, don’t get me started on this:

On Thursday, knowing that the conference attendees would leave early in the morning for London — for the MDG walk, lunch at Lambeth Palace, and tea with the Queen…

Then, we were off to London. Many months ago, I had been contacted by the Cara Trust, a philanthropic organization who has been providing support and services to those living with HIV/AIDS since the early days of the pandemic. They invited me to have tea with them and many of their clients — now not just limited to gay men, but including heterosexuals, women and especially women of color. What an honor to be asked, and what an honor to accept.

In one of those divinely humorous coincidences, our travel route from Canterbury and through the jam-packed traffic of London took us around Buckingham Palace, just at the precise moment that bishops and spouses were streaming off their coaches and into the Palace, for tea with the Queen. 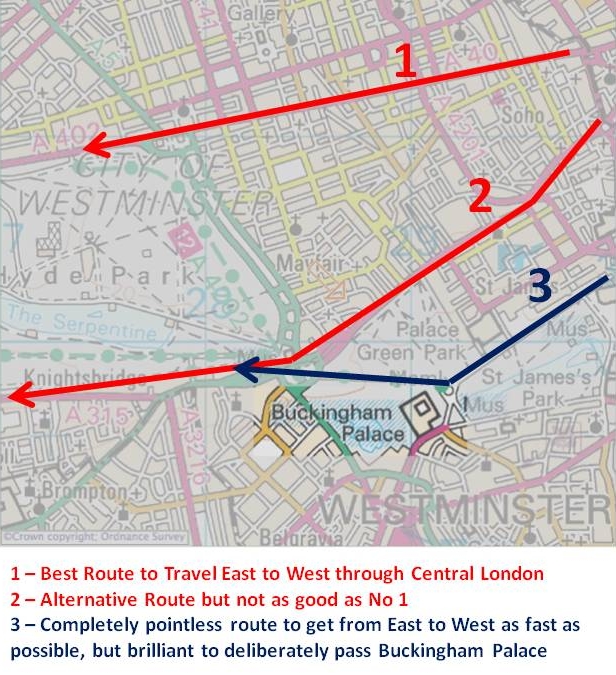 Update (Tuesday Morning) – I am of course assuming an East to West journey. The RAC informs us however that by far the best approach to where Gene was going would be via Battersea, approaching from the South and missing Buck Palace by a good mile or so. Check it out.

25 Comments on “A quiet, unpublicised trip…”