A month ago I wrote that we should enter into a period of grace and give the Lambeth / Windsor process one last throw. I got some stick from US conservatives for even daring to suggest such a thing. Here’s the key paragraph that caused upset:

Here then is perhaps one road forward for the Conservatives. GAFCON and the Global South should call an immediate moratorium on border-crossing. Yes, that will be painful for many. It will explicitly involve the dying to self that I spoke about above, for in the short term it will leave many abused and attacked in liberal dioceses, believing that they have been abandoned by those who said they would provide rescue. It would also implicitly involve confessing that the act of crossing diocesan boundaries was wrong, for we there would be no need to have a moratorium if crossing boundaries was seen by all as acceptable. But beyond these two things, it would at the same time indicate that we are serious about holding the Communion together, and what it would also do is give TEC, Canada (and Scotland now it appears) a very clear opportunity to also engage in the moratoria that they have been asked to impose, on same-sex blessings and ordaining and consecrating those in sexual relationships outside of marriage. There is a US House of Bishops meeting in September followed by Diocesan Conventions throughout the Autumn, easily enough time for all the necessary bodies in TEC to have come to a clear and unequivocal decision before the Primates’ Meeting in early 2009 on whether they want to take the path advocated by Rowan.

Today, Susan Russell unveiled an advert that Integrity are running in the September issue of Episcopal Life. This is it: 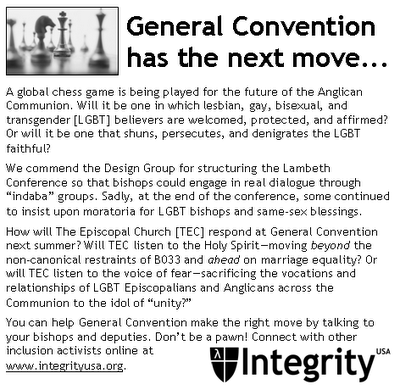 It looks as though Integrity are not interested in the moratoria or any part of the Windsor / Lambeth process. What do we all do now?