The latest on the South African runner Caster Semenya is on the Telegraph’s website. 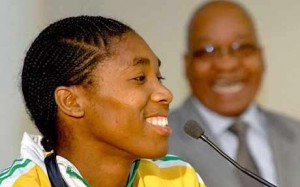 The tests carried out on the 18 year-old shortly after her victory in Berlin are believed to have shown that she has a chromosomal abnormality that gives her both male and female characteristics.

According to reports in the Australian media, the medical tests have established that she has no womb or ovaries and that she also has internal testes â€“ the male sexual organs responsible for producing testosterone.

Earlier analysis had revealed that Semenya’s testosterone levels were three times the normal level for a woman.

The International Association of Athletics Federations received the results of Semenya’s ‘gender verification test’ this week, but it has refused to confirm the findings until they have been verified by a panel of independent scientific experts and the athlete has been personally informed.

But Pierre Weiss, the IAAF secretary general, hinted strongly at the results on Thursday when he said: “It is clear that she is a woman, but maybe not 100 per cent. We have to see if she has an advantage from her possibly being between two sexes compared to the others.”

The IAAF will now have to decide whether to strip the teenager of the gold medal she won in Berlin.

The likelihood is that Semenya will be allowed to keep the medal, but she looks certain to be disqualified from competing in future women’s races.

A quick biology lesson for those unacquainted with the development of human babies. As a baby forms in his/her mothers womb, regardless of their gender they develop pseudo-ovaries in the area where a female’s ovaries are located. If the child is a boy (XY chromosome) the pseudo-ovaries descend to become testes.

What might have happened in this case? Well, it’s not been revealed yet what Semenya’s sex chromosomes are, so we can’t say whether we’re dealing with a chromosomal male (XY) with some external female genitalia, a chromosomal female (XX) with no womb and some male genital formation (this is the implication of the statement by Pierre Weiss), or some other sex chromosomal variation.

What is clear is that because the world is fallen these are not simple questions. Is someone’s sex what their chromosomes say it is (as Cranmer seems to be arguing this morning and a perspective for which I have some sympathy), dependant on what their sexual organs are or simply what I or you (queerly) choose it to be? Is someone who has sex chromosomes which indicate one thing, and genitals and hormones which indicate another “broken” and “un-whole” in any sense? Complicated…