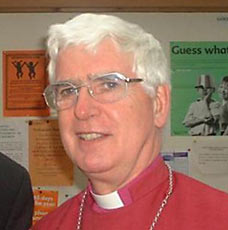 A very interesting statement from the soon to retire Bishop Tom Butler of Southwark popped up yesterday. Bishop Tom addressed the issue of whether parishes who took up the Pope’s offer might be able to walk away lock, stock and barrel with the church keys.

He said, ‘… the papal initiative of a couple of weeks ago has put the cat among the pigeons…’. He went on, ‘What matters in Southwark is that we seek to maintain the excellent relationships which we have with our Roman Catholic friends at every level of church life, Diocesan, Area, Deanery and Parish.’

He continued, ‘…questions were being asked of my office (so) I thought it wise to seek a little legal advice on the implications there might be for the Diocese and its Parishes if any Priest, or group of lay people wished to become Roman Catholics, which of course they are perfectly entitled to do, after all there has always been movement between the denominations and in recent times the Diocese of Southwark has benefited enormously from the ministry of several vicars who were formerly Roman Catholic priests.

But no priest or group of laity has the right to take church property with them when they change denominations, for a Diocese holds such property in trust for the mission and ministry of the Church of England to all the people of its parishes and this duty of care would continue.

I don’t myself see how a parish could legally “take” the parish church and other assets without specific statutory authority. In the case of the parish church, it would presumably mean a Scheme under the Pastoral Measure or specific legislation enacted for the purpose, and this could only be done with the goodwill of the Diocese. In the case of assets such as the church hall or other parish property, appropriation to another denomination would almost certainly be a breach of trust and would not be possible without the co-operation of the Diocesan Board of Finance as Custodian Trustees and probably also the involvement of the Charity Commission.Â  Parsonage houses are, of course, governed by the Parsonages Measure and an Incumbent cannot alienate the parsonage without obtaining the authority required by law, again the Diocesan Board of Finance or the Church Commissioners. Of course, in the months and years ahead much of this might well be crawled over by lawyers on all sides, but the general principles seem to be clear…..’.

Hmmmmm. Really? I’ve bolded a section of the press release because despite the fact that Tom thinks this is all cut and dried the actual position is a lot more complicated, as the BBC rightly points out.

Who owns the parishes/church buildings?

Nobody. In 2005 a Church inquiry found that various groups have different rights and duties. Parishioners, for instance, have the right of access for worship, and the right to burial.

The Church council is responsible for repairs and maintenance, and the churchwardens own the building’s contents.

But, legally, nobody actually owns England’s 16,000 parish churches. Ecclesiastical lawyers may be looking forward to a busy few years.

Right, so let’s get this straight. The Church Wardens own the contents of the building, so they could technically walk off with them, or transfer them to another jurisdiction. Would this be a “breach of trust” as Bishop Tom suggests? Not necessarily – depends on the terms of the trust that is referred to. What’s that you say – there is no actual trust drawn up? Not as simple then as Bishop Tom suggests.

Then we get on to the sticky issue of clergy freehold. Wikipedia gives us a brief introduction.

The parson’s freehold refers to a system within the Church of England in which the rector or vicar of a parish holds title to benefice property, viz., Church, Churchyard and Parsonage, the ownership passing to his successor. This system has recently been debated by General Synod, and, were Parliament to approve, could at least in part be modified.

The parson’s freehold is a type of benefice; originally also it established income from and tenancy of certain properties in recompense for the priest’s exercise of ecclesiastical offices. These would have included occupancy of the rectory (and its outbuildings), fees and Easter offerings, income from tithes (received in the form of a tax on properties within the parish bounds), and income from the glebe (parcels which could be farmed for the rector’s profit). These formed the basis for the rector’s income, out of which he lived, and kept the Church. Communion Alms met some of the needs of the poor. Often the Patron or another landowner would take the lead in repairs and extensions of the Church; sometimes the Rector or Vicar did so himself. For the purposes of law the rector owns the remaining property as a corporation sole. However, unlike usual fee simple ownership, the property did not pass to his heir upon his death. Instead, it passed to the next officeholder.

So the church building itself to all intents and purposes belongs to the vicar him(her)self and is passed on to the next office holder. The wikipedia article references two pieces in the Ecclesiastical Law Journal and I’m trying to get hold of them to comment futher, but while we wait for that it appears from this reading that if the incumbent decides to transfer the church to the Roman jurisdiction and the Church Wardens do the same with the contents, the Diocese might actually have a tough job stopping them.

In the meantime, what strikes me is that Tom Butler has attempted to suggest that something equivalent to the Dennis Canon exists in the Church of England. Nothing could be further from the case and it appears that the “general principles” are much less clear than the Bishop of Southwark seems to want them to be. If anybody more in the know wants to offer a legal opinion, do please comment below.