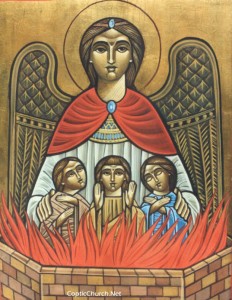 The last paragraph of the recently published “Manhattan Declaration” makes for interesting reading.

Because we honor justice and the common good, we will not comply with any edict that purports to compel our institutions to participate in abortions, embryodestructive research, assisted suicide and euthanasia, or any other antilife actÍ¾ nor will we bend to any rule purporting to force us to bless immoral sexual partnerships, treat them as marriages or the equivalent, or refrain from proclaiming the truth, as we know it, about morality and immorality and marriage and the family. We will fully and ungrudgingly render to Caesar what is Caesarâ€™s. But under no circumstances will we render to Caesar what is Godâ€™s.

Them there’s strong words and I wonder whether we might get something similar from the Church of England fairly soon. Let me explain.

As Simon Sarmiento pointed out in the Church Times last week, a joint parliamentary committee rejected suggestions from the Church of England that religious organisations be allowed to discriminate in the field of employment on the basis of religious belief. The Archbishop’s Council wrote:

What this comes down to is that the Archbishop’s Council was seeking to put in law a defence against not employing someone when their sexual behaviour was contrary to the doctrine of the religious body involved. This seems to be a way to get around the complications thrown up by the Priddis / Reaney case two years ago.

The response from the JCHR was to the point:

â€œWe consider that substantial grounds exist for doubting whether the â€˜reliÂ­gious ethosâ€™ exception . . . permits organisations with a religious ethos to impose wide-ranging requirements on employees to adhere to reliÂ­gious doctrine in their lifestyles and personal relationships, by, for example, requiring emÂ­ployees to manifest their religious beliefs by refraining from homosexual acts.

â€œWe agree with the Government that it is â€˜very difficult to see how, in practice, beliefs in lifestyles or personal relationships could consti-tute a religious belief which is a requirement for a job, other than ministers of religionâ€™ (which is covered by a different exception). This should put beyond doubt the position that the [religion or belief] exemption cannot be used to discriminate on the basis of sexual conduct linked to sexual orientation. We supÂ­port this view and recommend that this be made clear in the Bill.â€

So the answer is a very clear “no”. Be under no illusion – were the JCHR to have its way in the wording of the law, it would effectively make the current pastoral guidance in “Issues in Human Sexuality” which says that clergy cannot be involved in sexual relationships outside of marriage illegal.

Here’s the question. If the Equality Bill passes in its present form, what is the Church of England going to do? Will it find the courage of its convictions, or will it bow the knee to Caesar. Watch this space!

7 Comments on “Bending the Knee”