Here’s a brilliant video (courtesy of Jeff) which looks at the priesthood from the perspective of the Roman Catholic Church. 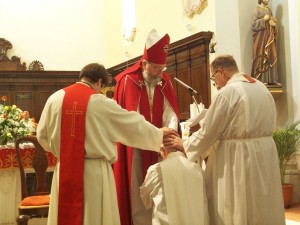 There are various views of ordination and ministry that exist in the Church of England. Some evangelicals tend more towards a functional view of ordination, that ordination recognises and permits ministry. Most catholics would see ordination as a more ontological moment, where ordination changes the person of the man being ordained to make him a priest.

What do I think? I tend to the catholic view, but I see ordination as recognition of ontological difference, not creation of. Ordination says, “Yes, this person has been set apart by God from the beginning of time to represent Christ in a particular way on behalf of the Church. We now pray that the Holy Spirit will come, be with him, and help him to do for the rest of his life that for which he has been created.”

Also in the video are a number of propositions about what priests do. I was caught by this section:

The priest, when he presides over the liturgy, is presiding in persona Christi … In the Mass, the priest as a man should disappear. He should make room for Jesus, so that Christ can be the one who speaks, so he can be the one who manifests his presence to his congregation.

How does that fit into modern charismatic forms of worship? Does it jar with them, or in reality when we preach and when we make space for the Spirit to do his work as people respond are we doing exactly that, disappearing and making room for Jesus?

Update 19:00 GMT – Some good stuff from Sam Norton on the same theme:

I would say that ordination is primarily a separation sideways – baptism is the separation vertically.

I would also say that there is such a thing as the grace of holy orders. Have I been enabled to be a different person since being ordained? Surely.

Within the body of Christ, these are given responsibility for exercising judgement, for speaking the yay and the nay.

This is not trivial.

I sometimes think that those most concerned to deny any reality to ordination – whether called ‘ontological’ or not – are like Oedipus, stabbing out his eyes, because he cannot bear to see.