↓ Skip to Main Content
Home › Scripture › Who is the woman who annoints Jesus with perfume?

Who is the woman who annoints Jesus with perfume? 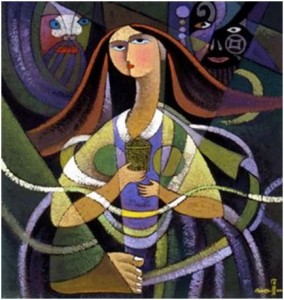 In response to a question from one of “my flock”, here’s an email I’ve just composed trying to get to grips with the different Gospel accounts. Your comments are welcome!

This one of those cases where the same story is told in different ways, and in some places two narratives have been combined into one. This kind of stuff happens because we think that Matthew and Luke were written by combining Mark’s gospel and a collection of “sayings of Jesus” which we normally call “Q” (from the German “Quelle”,meaning “source”). John’s Gospel is written at least a decade after Matt, Mark and Luke (if not up to 30 years after) and draws from all three of them plus a generation of theological reflection on who Jesus is. This means that sometimes John puts things together in a different order in order to make a specific point. We shouldn’t be worried about that! It’s a perfectly normal way of writing in those days and the doctrine of the inspiration of Scripture is not so much in that it is a perfect literal record of events, but rather that what we have now in the Bible is exactly what God wants us to have. Does that make sense?

Begin with Mark 14:3-9. The anointing takes place in Bethany, at Simon’s house. The woman who anoints Jesus is not named, and although tradition identifies her with Mary Magdalene there is nothing in the text to suggest it was her.

Now read Matt 26:6-13. You’ll see that the text is almost identical. Matthew has lifted Mark’s dialogue, changed one or two things (when you read the Greek there’s nothing of significance) and reported the same story, at the same point in time (during Holy Week, so the woman is anointing Jesus for burial. even before he is arrested, because that’s why you put perfume on a body – remember, the women on Resurrection morning were coming to the tomb with spices like nard).

Now read Luke 7:36-50. You see that it’s like the story as in Mark, but Luke has tagged onto the end of a parable which is a bit like the one from Matt 18:23ff but different. Why does he do this? Well either “Q” had it in the handed down reports of what happened at Simon’s house and Matthew chose not to use it OR Luke has decided to take this story from “Q” and to include it at this point in order to make the point that grace is the greater the more one has sinned. Note also that Luke places the anointing not during Holy Week (where it is a sign of his forthcoming death), but at the start of Jesus’ ministry (where it is a sign of his divinity – see Luke 7:47-48). There’s nothing wrong with this. Note that the account in Luke has a different dialogue to that in Mark / Matt – in Mark/Matt it’s about the waste of money, in Luke it’s about the sinfulness of the one anointing. Once again, that’s because of the theological point being made by the author.

As to why the feet are anointed, well the Luke passage comes straight after the comparison of John the Baptist and Jesus. I reckon it’s a nod to Isaiah 52:7-10, indicating that John the Baptist is the watchman proclaiming the sighting of the one who brings good news, proclaims peace and salvation and who is the God that reigns, and Jesus is the one who is the one who is sighted. It might also have something to do with the fact that the feet (and particularly the soles) in Middle Eastern culture then (and still today) is the dirtiest part of the body (so that’s why when Saddam Hussein’s statue was torn down when Baghdad fell, the Iraqis hit it with the soles of their shoes). Given that Luke makes clear the idea that Christ dies for sinners (unclean, unclean!) the nod to how Jesus will make himself a curse for sinners is clear.

One more thing at this point. Prostitutes in the C1 Middle East used to wear a small vial of perfume around their necks with a small hole in it to release a bit of the perfume at a time to tell passers-by what she was selling (herself for sex). For the prostitute in Luke’s account to break the vial is a sign that she has destroyed the sign of her trade, an indication that she has left that behind (she can literally no longer advertise herself). Her hair is also a mark of her profession, so to use it to dry his feet is to cover the sign (his feet) of his taking on himself our dirt and curse with her profanity. Powerful stuff indeed!

This then all raises the question that you ask -are they the same events? Those who are comfortable with the idea that the Gospel writers move things around to make specific points would say “yes”. Those who need things to be in the same chronological place in all the Gospels would say “no”. I have no problem with the idea that they are the same event, it’s just that Luke draws heavily on “Q” to add to the account and make a different point. He also places it at a different point in Jesus’ ministry, not because he’s mistaken but rather because he’s using the story to make a specific point.

Finally John 12.Â  John places the anointing at the same time as Mark/Matt (and this I suggest points us to the fact that this is when it DID actually happen and that Luke has moved it to a different time to make his different point). Of course, John names “Mary” as the one who anoints Jesus. I wonder whether this is a poetic device. Remember, in Jn 11 Jesus raises Lazarus from the dead after he has been in the tomb for four days. This would be about the point in time where you would anoint the body. I wonder whether Mary and Martha had bought the perfume for Lazarus, only to find that they didn’t need it!! Mary then anoints Jesus who is literally the “substitute” for Lazarus and for all of us. John uses the particular form of words “It was intended that she should save this perfume for the day of my burial”.

And of course John picks up the anointing of the feet rather than the head, which has all the parallels above, particularly with the idea that Jesus is the substitute for Lazarus.

So, does this mean that the woman who anoints in Mark/Matt/Luke is Mary, sister of Lazarus? Perhaps. What might be happening is that Matt and Mark recount the original event, John now has more information and fills out the details while Luke moves the whole event to a different time. Alternatively, John uses the story and moves it to the house of Lazarus to make the point that Jesus is divine, that he is the sacrifice and that he is the substitute.

If you take this approach then you’re approaching the Gospels not so much as literal accounts of what is true but as theological documents that teach us what is true. I know that’s a challenging concept, but I’m comfortable with it. What we’re very clear on is that what is being taught about who Jesus is and what he has done is absolutely true.

Enough for the moment? Let’s finish with this cracking CeCe Winans track.

1 Comment on “Who is the woman who annoints Jesus with perfume?”