No doubt many of you have already seen this. 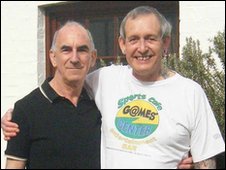 A gay couple were turned away from a Berkshire guest house by the owner who said it was “against her convictions” for two men to share a bed.

Michael Black and John Morgan, from Brampton, Cambridgeshire, had booked a double room at the Swiss B&B, Terry’s Lane, in Cookham, for Friday night.

When they arrived Susanne Wilkinson refused to let them stay.

She admitted she did turn the couple away because it was against her policy to accommodate same sex couples. The couple have now reported the matter to Thames Valley Police.

Under the Equality Act 2006 it is illegal to discriminate against people on the grounds of sexual orientation.

I’ll happily support all those who want to stamp out homophobia, but can I suggest that since the law outlaws discrimination on the grounds of sexual orientation, and since Mrs Wilkinson discriminated on the grounds of sexual behaviour (she was against having two men share a bed, not against have two gay men in her B&B), she should get herself a good lawyer and sit tight. It would be a very interesting test case if this ever came to court.

Of course, it’s fair to say that unless she doesn’t let out rooms to any unmarried couples she certainly can’t claim that she did what she did because of her Christian faith.

14 Comments on “The Berkshire B&B”