Fascinating article in today’s Daily Mail that I have only just caught up with. Some controversial stuff in there. 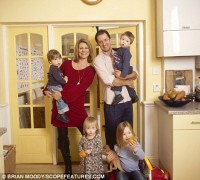 As I pieced over the failings, I took a second look at my history. Was I picking the wrong women or was I simply not cut out to be a lesbian?

This may sound totally coldhearted, but I made a calculated decision to try men again. I can honestly say that, although I was 34, this had nothing to do with my biological clock. I had always rather casually thought that, if I wanted children, I would use a sperm donor. So my decision was not in any way connected to a desire for a baby.

And, while I had male friends, I had not even had the faintest flicker of interest in any man for years. But I suspect the simple truth is that I no longer felt I needed to be defined by my sexuality. I had outgrown lesbianism.

For more than a decade my sexuality had been a vital part of who I was. When we’re young, we all need to belong to a tribe and to have a banner to march under. This may sound absurd, but calling myself a lesbian was almost like calling myself a punk or a goth.

I don’t want to undermine my relationships – they meant a great deal to me at the time and I look back on them with great affection – and I am well aware that many people will find it shocking, if not downright offensive, when I say that I chose a different path.

I repeat, I know many people are totally convinced that they are born gay and have absolutely no choice over their sexual orientation.

All I can say is that I believe not every gay person is gay for life. In particular, I believe that many women are capable of feeling attracted to other women – to be with someone who believes it’s perfectly normal to talk about how you feel and wants to know every single thought that passes through your head.

That feeling of total empathy and togetherness is a very specific bond between two women. Whether women act on these feelings or not depends, of course, on many complicated social and psychological factors.

And how about this for some post-gay introspection?

I could never in a million years have imagined, in the full throes of my lesbian life, that I would one day live such a conventional straight lifestyle.

In fact, I would have thrown up my hands in horror at the very idea. And perhaps it was no surprise that most of my lesbian friends were outraged that I had taken up with men.

It seemed a betrayal of all they and I had stood for. Diva magazine, the biggest lesbian publication in the UK, voted me Most Disappointing Lesbian Of The Year. And the criticism still continues.

There was (briefly) a Facebook group saying People Like Jackie Clune Should Be Taken Outside And Shot. Although the criticism is hurtful, I understand where it’s coming from – I’ve confused everybody.

In the gay world some people hate the way many of us believe sexuality can be fluid. The idea of bisexuality is anathema to them. They see it as a mark of indecision or even self-delusion.

Actually I have never thought of myself as bisexual. And I certainly don’t now that I am married. That would be tantamount to admitting that I am thinking of being unfaithful with a woman, which has never been the case.

But then this is an issue that provokes so much misunderstanding and downright anger. For many in the gay community, changing one’s sexuality is seen as a heinous act of betrayal. Straight people, for their part, always want to know why I switched sexuality (often with the offensive implication that I was somehow behaving strangely when I was a lesbian but I’m ‘all right’ now).