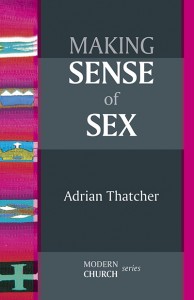 Adrian Thatcher’s new book in SPCK’s “Modern Church” series, Making Sense of Sex is a masterpiece of liberal theology which relies upon dictating the basis of theological truth to derive its outcome of validating sexual relationships traditionally condemned by orthodox Christianity. This is no bad thing – after all, it’s not as if Thatcher is ever going to suddenly affirm Evangelical stances on sex given that he can’t evenÂ accuratelyÂ represent modern conservative thinking on sex as anything but a subset of AugustinianÂ abhorrenceÂ at the very thought of the subject.

By rejecting Scripture and Tradition as ultimately authoritative, Thatcher explores the experience of sex and reflections upon that from a number of sources and in a number of directions. There is actually some incredibly useful thinking along the “sex as a signifier of the work of Christ” symbolism that I have been exploring for a number of years. For example, referring to Lorraine Cavanagh’s Making Sense of God’s LoveÂ (from the same SPCK series), Thatcher writes,

Without specifying how the eucharistic bread is or becomes the Body of Christ, there are clear analogies waiting to be drawn between the love-feast of the Lord’s Supper and the love-making with one’s partner. Christians may need to become familiar with these analogies.
p38

Those who read this site already are!

Some of this thinking about sex and its relationship to Christ is, like the opening three-quarters of Rowan Williams’ “The Body’s Grace”, incredibly useful, but other sections make far too literal assumptions about the Biblical text. Writing about theÂ Queer Body of Christ, Thatcher literally mixes metaphors and tries to make the Church “Christ’s Body” in Ephesians 5 not just an expression of the Ekklesia as the representative of Christ on earth but to all intents and purposes his actual physical body, leading him to present us with an androgynous saviour who breaks down the sexual roles and barriers of a more conservative reading of the New Testament. Not convincing in my book, but a useful launch into the whole area of homosexuality and an all to brief engagement with the conservative and liberal positions written on the subject in December 2011’s Anglican Theological Review. Thatcher lands some robust blows on both sides’ offerings but also makes some poorer critiques. For example, he complains that the conservative stance “is responsible for much pastoral wretchedness. It directly creates intense distress. It still pushes people into unsuitable marriages.” (p64) Well perhaps the response of *some* conservatives certainly, but others work incredibly hard to provide the support structures required for men and women to live lives of faithful chastity, either within or without marriage. Thatcher’s liberal position seems to amount to, “If a pastor tells you to do something that you don’t like, then that is wrong”. Compare rebuking a man who loves his sister and has a consensual sexual relationship with her with rebuking a man for having a sexual relationship with another man. Both men are pained by the rebuke and find the lifestyle change they are being called to unpalatable – how is one any different to the other?

And so to marriage. For a man who claims to be catholic in his theology, Thatcher’s seven marks of marriage show a remarkable non-engagement with the liturgical structures of marriage used by the Church of England and others. Procreation of children and their rearing is demoted from being one of the three pillars of conjugal union and instead relegated to a sub-set of the “unity of heart, body and mind”. By claiming that Conservatives “offer no objection to heterosexual marriages that are infertile in intent,Â prior to the marriage being solemnized, or to marriages that are thought to be, or known to be, infertile”, as a reason to reject their position, Thatcher ignores pieces like “What is Marriage” by Girgis, George and Anderson which address these objections head on. But the really ridiculous argumentation comes from Thatcher himself when, even in passing, he tries to reference Ruth and Naomi, David and Jonathan or the Centurion and his servant as models for homosexual desire being affirmed in Scripture. Ultimately, the chapter has to celebrate experience above Scripture and Tradition in order to seal Thatcher’s point.

It’s not that there aren’t some useful insights hidden in amongst the hundred or so pages, it’s just that they are surrounding by liberal presuppositions that produce an obvious exegetical contradiction. Scripture is quoted when it supports the author’s position and rejected when it might contradict it with no real justification given for such decisions except the triumph of experience and personal individual conscience in making ethical and theological judgements. Read Making Sense of SexÂ if you want to understand a well expressed liberal position on the issue and to begin to explore revisionist themes around Scripture and sexuality, but this is not a book that will win arguments or change positions.