Everything that is Wrong with some Conservatives 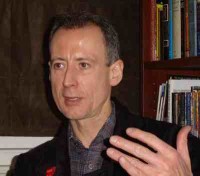 Rape As Most People Understand It
And as committed in Manchester.

If Peter Tatchell had his way, then a conviction in this case would be practically impossible, since the age of consent would have been lowered to 14. If anything, the victim would be liable for prosecution for sex in a public place, although Tatchell has, shall we say, eccentric views on that one, too. Tatchell would also have rendered legal almost every act of which any Catholic priest has ever been so much as accused. Furthermore, in The Guardian on 26th June 1997, Tatchell wrote:

â€œThe positive nature of some child-adult relations is not confined to non-Western cultures. Several of my friends â€“ gay and straight, male and female â€“ had sex with adults from the ages of 9 to 13. None feel they were abused. All say it was their conscious choice and gave them great joy. While it may be impossible to condone paedophilia, it is time society acknowledged the truth that not all sex involving children is unwanted, abusive and harmful.â€

In 1981, Michael Foot refused to endorse Tatchell as a candidate for the House of Commons.

In 2010, David Cameron offered Tatchell a seat in the House of Lords.

How the world turns.

Am I understanding David’s argument correctly? Is he saying that if the age of consent was down to 14 that would make this sexual assault legal? What kind of argument is that? Does he believe that if an older adult rapes an 18 year old, given that under the current law the age of consent is 16 that rape could never be prosecuted? What is that about?

Seriously folks, help me out here. Am I completely misreading this or is Mr Lindsay basically just claiming that Tatchell wants the age of consent lowered to allow older men to rape younger teens? And yes, I get the point that Tatchell is advocating adult / child sex, but he is very clear that such sex should be consensual – even if we disagree with him on his basic premise (which I assume most here do) that doesn’t mean that we believe he is advocating rape.

217 Comments on “Everything that is Wrong with some Conservatives”