A piece by Jerome Taylor in the Independent today makes one of the usual mistakes when discussing homosexuality and the Church, namely to think that if a person does one thing right that means that everything in their life must be right. 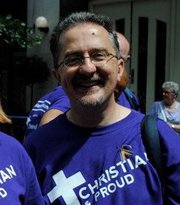 Like Jeremy Marks, Reverend Hazlehurst spent much of his life fervently convinced that homosexuality was wrong. And his conversion is no less dramatic. Sitting in a cafÃ© in Dorchester, where he now works as a prison chaplain, he charts his dramatic volte face.

Born into a relatively liberal high Anglican family, he became evangelical in his teens and decided to enter the church. Throughout theological college and his early working life he remained convinced that the scriptures insisted all forms of homosexuality were sinful. The discovery that friends and colleagues were gay confused him. He could see so much of the good they did, but every time he returned to the Bible â€“ principally two verses in Leviticus and four verses in the New TestamentÂ  – he saw what he felt was a clear cut theological position.

Over time he began to describe himself as an affirming evangelical â€“ someone who tolerates and welcomes homosexuals but nonetheless believes scripture clearly forbids same sex relationships. Then in early 2003 he had a revelation â€“ one that came from the depths of personal tragedy.

One April morning his wife Mel was struck down by an articulated lorry while cycling near their home in South London. She survived but for months it looked like Mel would remain in a coma and even when she looked like she might just pull through she was hit by an infection. Rev Hazlehurstâ€™s faith was shaken and, he says, he might have lost it altogether were in not for one man: the now Dean of St Albans Jeffrey John.

At that exact time Jeffrey John â€“ one of the few senior Anglicans to be open about being in a same sex-relationship â€“ was made the Bishop of Reading. The reaction from the conservative evangelicals was swift and brutal. John was vilified and condemned as a sinner who could not possibly be a leader. Some even threatened to split the Anglican Church in two if his appointment was continued. Eventually the Archbishop of Canterbury Rowan Williams pushed for Jeffrey John to back down and he reluctantly resigned his post.

â€œTwo months after the accident it looked like Mel was dying and I was in pieces,â€ Rev Hazlehurst explained. â€œJeffrey was there for me at that time, even though that was exactly the same time he couldnâ€™t go home at night because of all the press camped out on his lawn and he was being torn apart by one half the Church.â€

He added: â€œIt felt like to me that the fruit of his life was so profound and he was being Christ to me in such a profound way that I needed to go back to the Bible and re-examine what it said. It didnâ€™t feel right that God said this person was being sinful. And when I went back the blinkers were gone, I suddenly saw things in a new way.â€

Well that’s interesting. Break down the story though and we see clearly what the problem with it is. Firstly, Hazlehurst describes himself as affirming before 2003 because he “welcomed and tolerated homosexuals”, so on that basis we’re all pretty much affirming. Then his great conversion came because someone was nice to him.

Look, I’m not saying Jeffrey John was anything but superb in how he helped Benny, but the simple truth of the matter is that Christians who are fruitful in many areas still sin and their fruitfulness in those other areas doesn’t suddenly validate their sin. I’m a pretty decent chap and you’ll find lots of people who will tell you how marvellously pastoral I am. At the same time speak to my family and they’ll tell you that I can be a selfish, angry, lazy person at the best of times. Does the fact that I’ve helped so many people and done so much for charity (don’t like to talk about it) mean that my selfish, lazy moments are actually OK and even good?

It’s a ridiculous way of arguing – “this person was nice to me so therefore every aspect of their life must be OK”. Come on, let’s not be so silly. We all know that one virtuous aspect of our life does not mitigate a sinful behaviour. There is absolutely no contradiction in saying that Jeffrey John was a superb pastor in this instance (even if he’s a lousy biblical preacher) and yet he is both seriously wrong on the issue of sexual behaviour andÂ he is unrepentant for previous sin. But let’s not say that because he does kind and generous things that must mean that all his choices are correct.

Thankfully, Jerome’s piece eventually moves onto actual theology, but then once again like all these pieces we get blanket statements with no support.

Oh good grief. What nonsense. There is nothing in the Old Testament passages on the subject which has any reference to cultic or temple prostitution. Nothing. If Jerome Taylor (or Hazlehurst or Bakker) want to suggest otherwise then give me chapter and verse. I’ve got my critical Hebrew text open on my desk so we can do the verses one by one. Where are the references to prostitution or cultic behaviour? There aren’t any – they are imposed on the text with no evidence whatsoever.

As for the New Testament verses, we’ve done those to death on this site but in case you’re in any doubt try here, here, here, here and hereÂ (for starters). It can be easily demonstrated that the claims made above that those verses are “aimed at a Roman audience, one which encouraged same sex relationships outside of marriage for largely pleasurable reasons” are way too bold, sometimes fabricated and also internally inconsistent.

But the best is yet to come.

â€œThere is nothing in the Bible which condemns consensual, loving, committed gay relationships,â€ concludes Rev Hazlehurst.

True, but there’s also nothing in the Bible that explicitly condemns consensual, loving, committed incestuous relationships (and if you think that such a thing doesn’t exist you really must get out more). Does that mean they’re OK?

No, didn’t think so. Tortuous logic once again.

Put all that aside and it’s an interesting piece on how some Evangelicals are changing their minds on the subject. What’s even more interesting though are the number of evangelicals who are quite happy to admit to same-sex attractions and yet don’t buy into this shallow theology. Did you know an interesting fact? True Freedom Trust has *way* more members then groups like Changing Attitude. On top of that, increasingly more and more leaders in the Evangelical Church who are homosexual are willing to stand up and say that despite their sexual attractions they don’t follow the revisionist way of thinking and instead experience fulfilled lives letting God be God and trying to follow his desires for their lives.

Now, let’s wait for Jerome Taylor to do that piece…