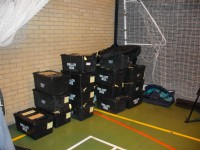 We’ve had six councils declared overnight and the results are showing a definite pattern. Although the UKIP vote is rising quite dramatically across the country, it’s not rising in aÂ targetedÂ manner. Where UKIP have previously not contested a seat they have done particularly well, but where they have previously done well their vote gains are not so dramatic in terms of percentage of the total poll.

This means that they will still do fairly well (possibly 200 or more council seats) but not the dramatic position I outlined a day ago.

As more results come in it becomes clear that UKIP has no organised presence on the ground. The votes are falling like snow – everywhere and in no order – there has been no targetting of resources in seats more likely to go to UKIP. What’s *really* interesting is that the share of the vote doesn’t really vary regardless of whether UKIP stood somewhere before – so the “big” swings are happening where they didn’t stand before, but where they had previous candidates they aren’t making as big an impact. This means that forecasts like mine above which are based on ratio swings are next to useless in modelling the effect.

I’m going to try and explore this in more detail in my neck of the woods of Kent.