There’s also a long article over at BuzzFeed. 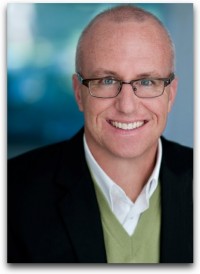 Chambers has often said that his introduction to Exodus saved his life. Coming from a sheltered childhood, it was the first time heâ€™d been around other people wrestling with the same issues he was. Somewhat ironically, though, his early days at Exodus also coincided with his deepening identification as a gay man. â€œI went to Exodus when I was 19, and thatâ€™s when my eyes were opened to the whole gay world around me,â€ he says. â€œSo in the midst of being involved with the local Exodus group, I also got involved with the gay community. I wouldnâ€™t say I was out and proud with everybody I knew, but there were certain people that knew, people I worked with at a restaurant.â€

His goal at Exodus though was clear: He wanted to become straight. â€œI went in and told the guy the first time I met with him, â€˜I want to be here six months, then I want to be done with this.â€™â€

Chambers told his parents of his struggles with what he calls â€œsame-sex attractions,â€ and they surprised him by being extremely supportive, particularly of his efforts to change. Chambers attended an open group, sharing his experiences and praying for himself and his fellow strugglers. He worked with an accountability partner and had sessions with a counselor to talk about being molested by an older teenage boy when he was 10.

â€œHe was an actual licensed mental health counselor that I would meet with once a week and weâ€™d talk through all these things,â€ he says. â€œNo hocus-pocus, just talking. It was amazing and helped me deal with a lot of wounds I had. But I never went through reparative therapy.â€

Despite the work he was doing, he eventually realized his original goal â€” to walk out in six months as a happy, well-adjusted heterosexual â€” was unrealistic. â€œI hoped the gay stuff would go away and I wouldnâ€™t feel that way anymore,â€ he says. â€œIt never did happen.â€

â€œAlan Chambers does not have an understanding of what sexuality and sexual orientation really is,â€ he says. â€œHeâ€™s not educated. You have an unqualified person leading this organization who does not have the answers, and therefore heâ€™s throwing his hands up in the air, saying, â€˜I donâ€™t know what to do next!â€™ He should have just resigned and let someone else thatâ€™s a more effective leader come in rather than selfishly and narcissistically burying it.â€

Doyle further cautions against reading Exodusâ€™ demise as some sort of cultural bellwether. That said, itâ€™s worth mentioning that he also does not believe that the extremely low turnout at his organizationâ€™s Ex-Gay Pride Rally on Capitol Hill on July 30 â€” 10 people showed up â€” was a sign of the movementâ€™s decline, but rather a product of the fear of retaliation from the forces of what he calls â€œhomofascism.â€ He doesnâ€™t think the recent shifts in society at large â€” notably, the Supreme Courtâ€™s rejection of the Defense of Marriage Act and â€œdonâ€™t ask, donâ€™t tell,â€ and the growing acceptance of same-sex marriage â€” are indicative of a similar shift in attitudes within the ex-gay movement.

In some sense, Doyle is right. The practical effects of Exodusâ€™ demise are minor in comparison to the symbolic ones: Many of the former member ministries have carried on with the same programs they had before, just not under the Exodus banner anymore. Doyle points to the Restored Hope Network and other ex-gay ministries as evidence of many who havenâ€™t given up the fight.

â€œYou canâ€™t let this man speak for all these people around the country. There is still a widespread belief among the ex-gay community, a predominant belief, that people can and do change.â€

As I said when the announcement of Exodus’ “closure” was made, it will have very little impact on the ground. Many of the member ministries have realigned with the Restored Hope Network, and indeed, there is some genuinely valid anger as to why Chambers closed down Exodus rather than just leave to start his new ministry Speak Love. However, after the Board was changed to be self-appointing rather than voted on by the member ministries, there was no accountability for the management of Exodus to its membership.