How NOT to Train Up a Child

A little storm is beginning to brew on twitter tonight about a book that Amazon UK is selling. It’s called To Train up a Child and it is one of the most pernicious little excuses for violence against children that I have ever read.

Let me give you some quotes. 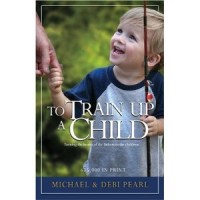 THE PROPER RESPONSE
The proper response would have gone something like this: “Johnny, here is a rag, clean up your mess.” “No, I don’t ‘wanna’.” And he continues to dabble in the water, sort of rocking back and forth with one shoulder and the chin down, not too earnestly involved in the water, yet waiting to see if the mother is going to let him be. Rebellion is in his heartÍ¾ but he faces a superior power, so he hesitates. She again says, “Johnny, clean the water up now.” (With my children, one command is all they would get.) If he again hesitates, she goes for her switch. If he hurriedly attempts to avert a switching by cleaning the water, it will make no difference. She returns with the switch, and sitting in front of him, says, “Johnny, I told you to wipe up the water, and you hesitated, therefore I am going to have to spank you so you will not hesitate the next time Mama wants her boy to grow up to be wise like Daddy, so I am going to help you to remember to obey. Lean over the couch. Put you hands down. Now, don’t move or I will have to give you more licks.”

She then administers about ten slow, patient licks on his bare legs. He cries in pain. If he continues to show defiance by jerking around and defending himself, or by expressing anger, then she will wait a moment and again lecture him and again spank him. When it is obvious he is totally broken, she will hand him the rag and very calmly say, “Johnny, clean up your mess.” He should very contritely wipe up the water. To test and reinforce this moment of surrender, give him another command. “Johnny, go over and put your toys all back in the box.” Or, “Johnny, pick up all the dirty clothes and put them in the basket.” After three or four faithfully performed acts of obedience, brag on how “smart” a helper he is. For the rest of the day, he will be happy and compliant. The transformation is unbelievable.

This apparently is the method for dealing with a three year old who won’t tidy up his mess – beat him into submission. How about as 12 month old who just wants to run around a bit.

As I sat talking with a local Amish fellow, a typical child training session developed. The father was holding a twelve month old boy who suddenly developed a compulsion to slip down onto the floor. Due to the cold floor, the father directed the child to stay in his lap. The child began to stiffen so as to make of himself a missile that would slip through to the floor. The father spoke to him in the German language (which I did not understand) and firmly placed him back in the sitting position. The child began to make dissenting noises and continued the resistant slide. The father then spanked the child and spoke what I assumed to be reproving words. Seeing his mother across the room, the child began to cry and reach for her. This was understandable in any language.

At this point, I became highly interested in the proceedings. Most fathers would have been glad to give up the child to continue their own conversation. It was obvious the child felt there would be more liberty with his mother. If he had been given over to her, the experience would have been counterproductive training. He would have been taught that when he cannot get his way with one, just go around the chain of command. The faithful mother, more concerned for her child’s training than the gratification of being clung to, ignored the child.

The father then turned the child away from his mother. The determined fellow immediately understood that the battle lines had shifted and expressed his independence by throwing his leg back over to the other side to face his mother. The father spanked the leg that the child turned to the mother and again spoke to him.

Clearly, the lines were drawn. The battle was in array. Someone was going to submit his will and learn his lesson. Either the father would confirm that this one year old could rule his parents or the parents would confirm their authority. Everyone’s happiness was at stake, as well as the soul of the child. The father was wise enough to know this was a test of authority. This episode had crossed over from “obedience training” to discipline for attitude.

For the next weary forty five minutes, fifteen times the child would make his legs move, and the daddy would turn him around and spank his legs. The father was as calm as a lazy porch swing on a Sunday afternoon. There was no hastiness or anger. He did not take the disobedience personally. He had trained many a horse or mule and knew the value of patient perseverance. In the end, the twelve month old submitted his will to his father, sat as he was placed, and became content even cheerful.

Some will say, “But I couldn’t take it emotionally.” Sometimes it is difficult and trying to set aside your plans for the sake of child training. It does involve emotional sacrifice. Yet, what is love, but giving? When we know it will work to the temporal and eternal good of the child, it is a joy instead of a sacrifice. Where our motives are not pure, where we suspect anger may be part of our motivation, our pricked conscience causes a reluctance to act. We fear that our discipline is an act of the ego to dominate. We must deal with our own impurities for the sake of the childÍ¾ for if the child doesn’t receive this kind of training, he will greatly suffer.

Are you reading this with me? To get a 12 month old child to sit still for an hour, you beat him into submission.

I think this is unacceptable and I hope you do too. We’re not talking about the occasional spank when a child is about to do something incredibly dangerous. We are talking about a systematic campaign of physical punishment for any misdemeanor. Think I’m over-egging the case? Why don’t you go and read the whole thing here to see how outrageous this book is.

And yet Amazon UK stock this book. What are we going to do about it? Well can I suggest letting them know on twitter. Here they are. And then tell your friends to do the same. Use the hashtag #lovenotbeat and let’s see if we can get Amazon to withdraw this book from their offering.

23 Comments on “How NOT to Train Up a Child”