Watching Only Connect last night on BBC Four (we’re high-brow in the Ould household don’t ya know), I have to admit I took one look at one of the female contestants and thought “Is she or isn’t she?” To see what I mean have a look at the episode yourself.

Now what was going through my mind was, is she trans, is she Kleinfelters, what is it? This wasn’t out of some puerile finger-pointing (if I’d wanted to do that I’d have pointed out the Zaphod Beeblebrox lookalike on the other team) but rather an interest in sexual identity and how that may be linked to genetics. When we were waiting for Zachary’s diagnosis from the placenta biopsy, I read up all the things it might be and was fascinated by what variations can occur in the 23rd chromosomes.

But it turns out that Emma Laslett is trans. Here’s her description of herself (you need to scroll down the page). 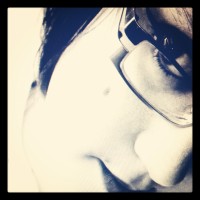 Iâ€™m Emma, a 21-year-old, pansexual, transgender French student (as in a student of the language, not a student of the nationality) and part-time music reviewer from scenic (and by â€˜scenicâ€™, I mean â€˜largely made of concreteâ€™) Milton Keynes, in the UK. When Iâ€™m not reading pretentious books or frantically writing essays in actually-scenic Oxford during term time, I read, listen to a ridiculously eclectic variety of music, and play prodigious amounts of video games. Iâ€™m pro-people, pro-freedom, and anti-people being dicks. Also, I speak six languages (to a greater or lesser extent), can neck a pint in five and a quarter seconds (thank you archery parties for teaching me this), and have scars on my eyeballs. Yay factoids!

Quite an arty photo as well I think you’ll agree.

Of course we’ve covered transgender issues here before and as I’ve indicated in the past the subject should cause conservatives to stop and ponder a bit before just dismissing it out of hand.

There are some interesting examples of men and women who have considered sex reassignment surgery and then changed their minds, coming back into happily living in their birth sex. At the same time we have some good examples of men and women who are trans and live comfortably in that identity. Possibly the best example of this in the Church of England at the moment is the priest Rachel Mann who is based in Manchester.

But back to Emma. What I found interesting reading her biography was this description of “pansexual”. Now, I’ve never head that phrase applied to someone outside of a perjorative by some of the less savoury parts of the Conservative blogosphere. But a little trip to Wikipedia (the fount of all knowledge) reveals the following.

Pansexuality, or omnisexuality, is sexual attraction, sexual desire, romantic love, or emotional attraction toward people of all gender identities and biological sexes. Self-identified pansexuals may consider pansexuality a sexual orientation, and refer to themselves as gender-blind, asserting that gender and sex are insignificant or irrelevant in determining whether they will be sexually attracted to others. The Oxford Dictionary of English defines pansexuality as, “not limited or inhibited in sexual choice with regard to gender or activity”.

The concept of pansexuality deliberately rejects the gender binary, the “notion of two genders and indeed of specific sexual orientations”, as pansexual people are open to relationships with people who do not identify as strictly men or women.

OK, that makes sense and I see the distinction between pansexuality and bisexuality where one is a rejection of the gender binary that the other affirms.

Is there not something philosophically inconsistent about being a trans pansexual? If gender or activity are not important for sexual attraction, why are they important for sexual or gender identity? What I mean is this – if it isn’t important whether one is attracted to a particular gender or sexual activity, why is the gender of the pansexual itself important? Why did Emma think it was important for her to have a female gender and therefore accept the binary gender differentiation that implies (IÂ don’t want to identify as a man, I want to identify as a woman) yet at the same time reject such a differentiation in her sexual attractions?

Can you see my point? I’m not criticising her decision to identify with a female gender, I’m questioning whether such an identification itself undermines the philosophy behind her stated sexual preferences.