A fascinating paper from New Zealand published three years ago to add to our collection of research on sexual orientation causation. Here’s the meaty bit.

Childhood Correlates (Prior to 16 Years) and Sexuality

Parental educational level was unrelated to membership of the five different sexuality groups (p=.30), but those whose parents had only primary education were slightly more likely to report being heterosexual with no same-sex experience (96.2%) than those where at least one parent had secondary education (94.5%) or tertiary education (94.2%) (p\.02 for both comparisons). Family of origin was associated with membership of different sexuality groups (p=.001) but the pattern was complicated. Compared with those brought up by both biological parents, those with a biological parent and an opposite-sex stepparent were about twice as likely to be heterosexual with same-sex experience only, whereas those brought up by two other opposite-sex parent-figures were more than twice as likely to be homosexual and marginally more likely to be bisexual. Those from single parent families did not differ in sexual orientation or behavior from those brought up by two biological parents.

Here’s the data table referenced above, but it doesn’t show the non-heterosexual aggregates which are described. Click on the table for a larger version. 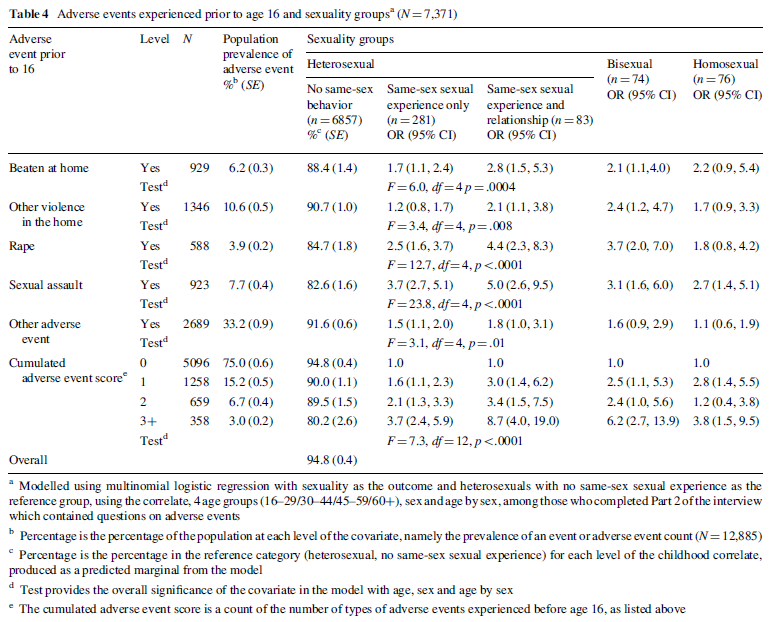 A quick guide to reading this table. We’re looking for prevalence rates for the non “completely heterosexual” groups where the 95% Confidence Intervals for the OR (basically the ratio of the likelihood of the observed phenomena occurring in the “non-straight” group compared to the “completely heterosexual group) lie outside 1. So, look at line 2 (“Other violence in the home”). The “Same-sex sexual experience only” group has an OR of 1.2, indicating that in this group 20% more respondents had experienced other violence in the home. But the 95% Confidence Interval bounds are 0.8 and 1.7 so it could be that the rate is actually only 80% of that found in the “straight” group. On this basis we reject the idea there is any difference between the two groups. Now move one along and you’ll see for the “Same-sex sexual experience and relationship” group the lower bound of the CI is 1.1, so weÂ are confident that there is a significant difference.

Look at the last column. The only adverse effect that appears to affect the development of a strictly homosexual identity is sexual assault (but not rape). Compare this to the “straight but done some gay things” groups and it seems that almost all the adverse effects mean you are more likely to have “experimented” (for want of a better word).

Also, from the bottom of the table we can see that when you look at any adverse event there is a significant effect apart from for two events (and interestingly for that number of adverse effects the bisexual group is right on the cusp of the acceptable Confidence Interval). You would expect to see the rising OR values that you do in the “straight but done gay things” group for increased adverse effects but you don’t see that for either the bisexual or homosexual groups and that makes me wonder whether we can trust that bit of the data. A repeat study would be interesting.

In summary, we can say with confidence that a number of adverse childhood effects seem to increase the likelihood that a child will identify in adulthood as bisexualÂ or will identify as heterosexual but will report same-sex experiences and relationships. We see hints of the same pattern with those who formally identify as homosexual but it is less apparent and further research would help to clarify. What we could be observing is an effect that makes any kind of homosexual experience or identity more likely or it could be that it is a particular effect in “straight” people (giving them a tendency to engage in homosexual activity) but it is not such a pronounced effect in those who are naturally homosexual (though this appears less likely).

One thing is for sure, the research does not tell us why such adverse effects lead to same-sex experiences or bisexual (or homosexual) identity.

I’ve uploaded the whole paper here so you can read it yourself.