Blimey, they picked an Evangelical!!

The new Bishop of Bangor is the current Archdeacon of Cardigan. 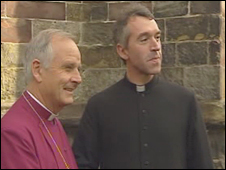 After two-and-a-half days locked in a cathedral, members of the Church in Wales have named their choice for the next Bishop of Bangor.

The Archdeacon of Cardigan the Venerable Andrew John, 44, is the ecumenical officer for the St Davids diocese in west Wales.

The 46-member electoral college had been meeting in the city’s cathedral since Tuesday.

Mr John now has 28 days to decide if he will take on the role.

He is the 81st Bishop of Bangor.

The Electoral College of the Church in Wales made the decision on the third and final day of its meeting at Bangor Cathedral.

He studied a Diploma in Pastoral Studies in 1989 at St John’s College, Nottingham.

He was ordained as a deacon in 1989 and as priest in the Diocese of St Davids in 1990 and has served all his ministry so far within that diocese.

He has been vicar of Pencarreg and Llanycrwys since 2006 and Archdeacon of Cardigan since 2006.

6 Comments on “Blimey, they picked an Evangelical!!”