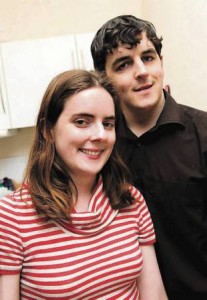 From the Islington Gazette:

A HETEROSEXUAL Islington couple want to become the first in Britain to have a “gay” civil partnership – because they do not believe in marriage.

Civil servants Tom Freeman and Katherine Doyle, both 25, of North Road, Holloway, do not agree with marriage because they say it is “an apartheid” that segregates straight and gay people.

The couple, who have been together for nearly four years, want the same legal rights as a husband and wife – but they do not want to enter an institution that is closed to homosexuals. So, in the interests of equality, they are demanding that they be allowed to enter a civil partnership.

“The answer is there are conservative people who feel offended by having gay people in their precious institution. It’s quite an insulting compromise.”

On November 24 the couple are set to give “notice of their intention to form a civil partnership” at Islington Town Hall, in Upper Street, after duping council registrars by only giving their initials.

It’s an interesting PR stunt, but that’s all it is as when they turn up at the registry office they’ll be politely turned away. Seems to me that their argument is also convoluted, since when they say “Effectively marriage and civil partnerships are exactly the same”, that rationally means that they should have no objection with entering into marriage or a civil partnership. Less of a reasoned case and more of a photo op methinks.