Here’s to you Mrs Robinson…. 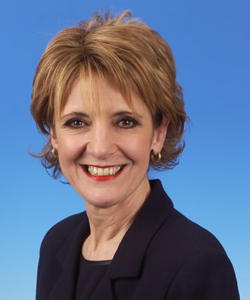 … Jesus loves you more than you could know, even if everybody else has the knives out for you and your husband.

You can’t really blame the Schadenfreude enthusiasts can you? Iris Robinson made the headlines over a year ago by not being shy in forthcoming on the Biblical stance on homosexuality. Throw in a few abominations, add to that some ill-conceived discussion about the similarity to child abuse and who wouldn’t be public enemy number one?Â  It appears though that there were a few abominations (Lev 18:20,26) closer to home. On top of that there are issues of financial probity that affect her husband Peter Robinson, Northern Ireland’s First Minister.

Actually, perhaps better language to use might be “sinner”.Â  Yes, there we have it ladies and gentlemen, Iris Robinson is a sinner. Who’d have thought it? A human being, a senior politician, a pillar of the Ulster establishment is, after all, not perfect.

But, and this I find really interesting, she knows that. Read her statement again and you see that she gets what she’s done.

Everyone is paying a heavy price for my actions. Psychiatrists may suggest that my mental illness was a significant factor explaining my irrational behaviour. I do not, in any way, question or doubt their judgement, but in order to master my life, I do not want to dilute the blame or resist taking full responsibility for my actions. I am completely ashamed and deeply embarrassed.

I am aware that I did not only hurt Peter, I hurt my family and friends. I let down thousands of people who placed their faith in me and though my medical condition was a factor, I was not, at this time, true to the values, I professed. I grieve that I have damaged my profession in Christ, but I am comforted that He was able to forgive even me.

…I do not deserve a second chance but I have been given one. Nothing is more important to me.

I sincerely apologise to all those I have hurt and let down. I have inflicted deep pain on my husband Peter, my family, friends, staff and all those who have supported me. I am so, so, sorry.

Powerful stuff and a model confession. “I was wrong. I can’t blame anybody else. Even though I was ill I was still responsible”. And there’s more, because in her sorrow Iris recognises that her actions have damaged her witness to Christ (which is of course why many are celebrating her fall). Of course that’s the same for all of us isn’t it – the moment that we start making judgements about others the world is just waiting to make a judgement about us (ironically, often at the same time that it quotes Matthew 7:1-2 at us for judging in the first place. Aaahhh… the world’s a funny place).

But the killer (as it were) of Iris Robinson’s confession is the line, “I do not deserve a second change but I have been give one”. Oh yes Iris! Absolutely right – that’s the good news, that Jesus loves us so much that his death on the cross gives us a second, third, fourth, fifth, sixty, seventy times seventh chance,Â  as long as we realise that we need the power of his shed blood. As a moderately cool Tribe put it two decades ago – We don’t get what we deserve. We don’t. Those who are in Christ and trust him for their future don’t get what they deserve. They deserve the due results of their sin and instead they get eternal salvation.

Let’s be honest – the political career of Iris Robinson is over and my hunch is that her husband Peter’s future as Northern Ireland anything (let alone First Minister) is going to be pretty short lived. But you know that’s OK, because if they realise (and I think they do) that their worth is based on what Christ has done for them and not what the world thinks of them, they’ll be fine in the grand scheme of things. To be sure (trust me on this), confession of sin and the truth of affairs is hugely painful, but it pales in comparison to the wounds that really do heal such sin and brokenness. The Cross of Christ is a place of curse and sin and failure that can be celebrated and revelled in because it is the place where our shame and disgust and abomination are crucified and destroyed for all time.