↓ Skip to Main Content
Home › Holy Week › Are we all about to become History Makers?

Are we all about to become History Makers? 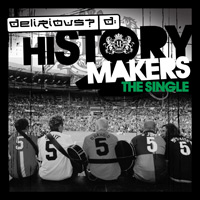 If I’m honest, I was slightly sceptical about the campaign to make Delirious’ History Maker the Easter Number One here in the UK. But guess what? As of this morning the song was Number 3 in the charts. That means that if just a few more thousand of us buy it it has a brilliant chance of being Top of the Pops on Sunday. Amazing!

I’ve just gone and bought the studio version and the live version from Amazon UK – both count towards the charts, so you can spend 98 pence and have both versions and help push it to number one both times.

If you buy the single, let me know in the comments below.

Here’s the latest on the campaign.

I just wanted to briefly update you on the campaign that ends Midnight Saturday. I’ve done around 20 interviews ranging from 5Live to local BBC stations as well as a news Piece on BBC East Midlands Today (you can see these on the official campaign website). Radio 1 also played the song that was a new entry at number six of the midweek chart. And to top it all off we have in excess of 60,000 people following the campaign.

The problem is, that a good number of those followers are yet to download the single. That’s where you come in.Â  We are currently lingering around the top 5 in terms of single sales, which is good news, but we want to ‘make history’ ourselves by getting this Christian song to the top of the Charts during the Christian season – Easter. So whether you are one of those people who have joined the campaign or not,Â  if you are willing, we could really do with your help.

All we are asking people to do, is download both versions of the song (‘studio’ version and the ‘live’ version) from one of our recommended sites. If the majority of people who receive this e-mail do that, then there is a huge possibility that you will be part of making history with this song.

It costs as little as 98pence (from Amazon) to download both versions. But it’s not all about the song. All the profits made by the band will be given directly to the superb charity CompassionArt who release people from poverty all around the world. We take so much for granted in our country, the fact of the matter is that if you’re reading this e-mail now, then you are more blessed than over two billion people in the world who cannot read at all. And if you have you have money in the bank, in your wallet, and spare change in a dish someplace, you are among the top 8% of the wealthiest people in the world!

So if you want to help us and be part of the campaign, please go now, download both versions of ‘History Maker’ and stay tuned for the Radio 1 Charts on Sunday.

God bless you and have a fantastic Easter!

7 Comments on “Are we all about to become History Makers?”