The God of Job and Jeremiah

On Friday night / Saturday morning, while sitting in hospital with one of Gayle’s relatives I managed to read Francis Chan’s “Erasing Hell” (which was partially written as a response to Rob Bell’s Love Wins). One particular passage on pages 140 and 141 struck me powerfully as it mirrored so closely our decisions and experiences with Zachary, both during and after his gestation. Here’s that passage. 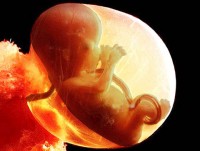 Throughout Scripture and throughout history, godly women and men have embraced the God of Job and Jeremiah. They held on to a God whom they didn’t always understand; a God who is immeasurably good, even though circumstances in life seem to suggest otherwise.

Years ago, I came across an article entitled â€œTwo Minutes to Eternityâ€ by Marshall Shelley, one of the editors of Christianity Today at the time. In the article, Marshall tells the story of the miraculous birth of his son. When the child was in the womb, Marshall and his wife, Susan, found out that their child had an abnormal heart and would probably not survive the birth, if he even made it that Far. And so the Shelleys wrestled with God. â€œThis was a design flaw,â€ Marshall writes, â€œand the Designer was responsible.” So they prayed. They prayed for a miracle, they prayed for survival, they prayed that the God of all compassion would give the child the breath of life.

Then the day of birth came, and the child was still alive. The child had survived the pregnancy! God is so good! As the child was born, Marshall looked upon his beautiful son: â€œHe was a healthy pink, and we saw his chest rise and fall. The breath of life. Thank you, God.”

And then the child died. Two minutes later, their son turned from pink to blue, and he died. The miracle of life was followed by the mystery of death. And as far as the Shelleys were concerned, the Designer was responsible. When the nurse asked the Shelleys if they had a name for the child, Susan responded: “Toby. It’s short for a biblical name, Tobiah, which means â€˜God is good.â€™â€

God is good? How could they say that? How could they believe such an unbelievable attribute of God, when everything in that moment seemed to be proving the opposite? Because the Shelleys believed that God is good not only when He makes sense to us, but even when He doesnâ€™t. God is good, because God is God. Goodness is inherent in who He is. And the Shelleys believed this. â€œThe name was what we believed, not what we felt,” Marshall writes. â€œIt was what we wanted to feel again someday.â€

And so it is with many things about God that donÂ°t seem to add up.

And so it must be with hell.

As I have said all along, I donâ€™t feel like believing in hell. And yet I do. Maybe someday I will stand in complete agreement with Him, but for now I attribute the discrepancy to an underdeveloped sense of justice on my part. God is perfect. And I joyfully submit to a God whose ways are much, much higher than mine.

The whole book is short but powerful. I’ll try and review it properly next week, but in the meantime you can get hold of a copy below.

2 Comments on “The God of Job and Jeremiah”