Here’s the Christian Today report from five years ago. 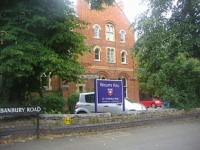 Britain’s leading evangelical college is facing increasing criticism, and not just from outside detractors.

Since a new principal took over last year at Wycliffe Hall, one of seven private Christian schools at the University of Oxford, more than half of its faculty have resigned. Critics charge new head Richard Turnbull with an abrasive management style and a narrowing of the college’s theological vision.

A letter authorized by Alister McGrath and two other former principals said Turnbull’s continuing leadership would turn away prospective faculty and students and saddle the school with a “limited focus on one strand of evangelicalism.”

Adding to the school’s troubles is a university panel review, released in September, which concluded that Wycliffe and Oxford’s other Christian halls were not providing a liberal education in line with Oxford’s values. The report recommended that Oxford regulate the curriculum of its permanent private halls. Teaching that squelches “the spirit of free and critical enquiry and debate” could cause a hall to lose its license.

Wycliffe Hall achieved permanent status with Oxford in 1996, thanks to the work of former principal McGrath, who significantly raised Wycliffe’s profile. Throughout its 130-year history, the school has produced a number of notable alumni, including Regent College professor and CT senior editor J.I. Packer, Bishop N. T. Wright, and former member of Parliament Jonathan Aitken.

But the evangelical Anglican seminary, which annually matriculates about 140 students, has undergone a seismic shift since McGrath’s resignation two years ago. One council member and 8 of 13 faculty members have resigned, including two of Wycliffe’s leading voices, vice principal David Wenham and professor Elaine Storkey, who produces the BBC’s religious radio programÂ Thought for the Day.

Supporters say Turnbull is fulfilling the institutional mandate given him when he was hired. In a letter sent to the Church of England’s newspaper, three student body presidents commended Turnbull for ushering in “more contemporary forms of management,” consistent with changes across the entire university. The students also wrote that Turnbull had “sharpened the focus of [Wycliffe’s] training without narrowing it” and was “appointing staff from across the evangelical spectrum.”

Likewise, in a letter toÂ The Guardian, Aitken wrote that the vast majority of Wycliffe’s students and council members stood behind Turnbull.

For his part, Turnbull told CT that “Wycliffe remains a college where the range and breadth of the evangelical tradition is welcomed and affirmed amongst both staff and students.”

The Church of England has moved its 2009 inspection of Wycliffe up by a year, to next October. While the college’s ability to enroll undergraduate students for Oxford degrees is expected to survive, the bigger question is whether its administration will gain the support of faculty members.

“If the turbulence that is currently going on does settle down â€¦ [then] this may be seen as a turning point at which Wycliffe went from one approach of evangelicalism to another approach that is just as well,” said Justin Thacker, head of theology for the U.K.’s Evangelical Alliance. “When Paul and Barnabas split over the issue of John Mark â€¦ there were two missions instead of just one. There have been divisionsâ€”and they have been painful divisionsâ€”but I hope that at the end of the day, each group that splits off goes to do so in the service of Jesus Christ.”

I’ll be reporting more on the de facto suspension of Richard Turnbull on tonight’s Anglican TV.

3 Comments on “Wycliffe Hall – A Flashback”