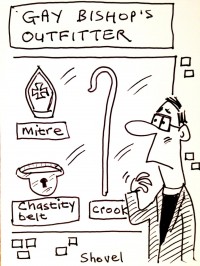 What is it with the media? They have a perfectly well laid out news report in the Church Times which is followed up by a reasonable and easy to comprehend press release from the House of Bishops. Result? Apparently the policy of the Church of England changes overnight and the Church is in crisis.

Lets get the timeline clear. When the House of Bishops responded to the introduction of Civil Partnerships the pastoral guidelines indicated that there was nothing intrinsically incompatible with being a priest and being in a Civil Partnership, as long as priests remained celibate. Then Jeffrey John was nominated as the new Bishop for Southwark (along with a number of other names) and as a response the House of Bishops sought legal advice as to what grounds would or wouldn’t be reasonable to form a judgement around whether a candidate was suitable. That advice was eventually leaked and then released and I wrote about it here.

The grounds for consideration were as follows.

On the basis of bullets three and four (and probably five) the Archbishops decided that Jeffrey John was not a suitable candidate. No news there.

When the House of BishopsÂ set-upÂ their committee to explore issues around Civil Partnerships, for the sake of not having any precipitative action that would pre-judge the deliberations of that consultation it was decided to have a moratorium on appointing anybody in a Civil Partnership as a Bishop. All that has happened yesterday is that the Church has clarified that such a moratorium has now been lifted. We are essentially simply back to where we were before. Issues in Human Sexuality is still the document the House of Bishops agrees to base their collective policy around, the legal advice issued over Southwark has not been rescinded and nothing really has changed.

But look at the response! Liberals are claiming some form of victory and conservatives are digging bunkers and threatening all-out war. What is that about? Did they both actually read the House of Bishops’ press release, because here’s what that said.

The House of Bishops’ Pastoral Statement on Civil Partnerships issued in 2005 did not address specifically whether clergy who entered such partnerships should be considered for the episcopate. What the House has now done, following the work undertaken by the group chaired by the Bishop of Sodor and Man set up last year, is to look at the matter again last month.

The House has confirmed that clergy in civil partnerships, and living in accordance with the teaching of the Church on human sexuality, can be considered as candidates for the episcopate. There had been a moratorium on such candidates for the past year and a half while the working party completed its task.

The House believed it would be unjust to exclude from consideration for the episcopate anyone seeking to live fully in conformity with the Church’s teaching on sexual ethics or other areas of personal life and discipline. All candidates for the episcopate undergo a searching examination of personal and family circumstances, given the level of public scrutiny associated with being a bishop in the Church of England. But these, along with the candidate’s suitability for any particular role for which he is being considered, are for those responsible for the selection process to consider in each case.

It’s very clear that the only acceptable candidates for Episcopacy are those that “live fully in conformity with the Church’s teaching on sexual ethics or other areas of personal life and discipline”. On top of that “all candidates for the episcopate undergo a searching examination of personal and family circumstances, given the level of public scrutiny associated with being a bishop in the Church of England” which seems to suggest the same kind of moral and legal reasoning that is encompassed by the legal advice given at the time of the Southwark row.

So Liberals are blowing the trumpets of victory too soon. But the same can be said for the response of some conservatives. Rod Thomas saidÂ (Reform) “If someone were to be appointed who was in a civil partnership, that would be a very divisive step, both within England and across the Anglican Communion”, but that seems to miss the point that (a) this possibility has been in place since 2005 and (b) if we knew we had a candidate that wasÂ avowedly celibate and taught wilfully a Biblical morality, what would it matter if for purposes of companionship and inheritance tax arrangements he had entered into a Civil Partnership? Are we that scared of friendship? I mean, if we believe its right to ask clergy questions about their sex lives (and for someone being asked to be a Bishop I can’t see why this should be a problem given the role of a Bishop), can we not trust them to answer truthfully? Doesn’t the approach of “We can’t acceptÂ any Bishop in a civil partnership, celibate or not” smack of homophobia? Would the advocates of such a position be happy with a celibate gay bishop not in a Civil Partnership but living (with clearly demarked boundaries) with a friend? How is that any different?

The problem over the past six or seven years around this issue hasn’t been clergy not being truthful, it’s bishops who haven’t asked them to be truthful. If conservatives want to lay out some grounds for conflict and draw their lines in the sand, wouldn’t it be better to concentrate on those responsible for enforcing discipline and Biblical pastoral care rather than those caught in the cross-fire over this issue?

The Church of England is trying to walk a very fine line between maintaining its traditional sexual ethic and seeing how such an ethic fits in within the statutory and cultural frameworks of the society it lives in. The policy it has in place at the moment (demanding celibacy of priests / bishops who are not married) is not incorrect and neither is the view that Civil Partnerships are not themselves intrinsically sexual. It is however the practice of this policy and view at a Diocesan level where the problems occur, so those opposed to further revisionism would best concentrate their efforts in that sphere if they want to see real results.

26 Comments on “Breaking News – Nothing Changes”