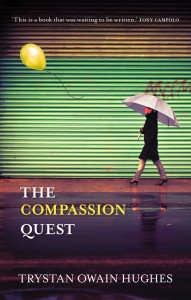 I remember when Trystan Owain Hughes trained alongside me at Wycliffe Hall – he was already a problem. Here was a man who had come to seminary from being the head of Theology at Trinity University College, Carmathen, Wales. What was he possibly going to do with his two years preparing for ordination? Another doctorate? Write a few more highly regarded journal articles? Tune up the vocal chords for his now regular appearances on Spirituality slots on BBC Radio including Radio 2’s “Pause for Thought”?

Perhaps the good problems continue today a decade later as Hughes’ second mainstream spirituality book hits the shelves. Following on from the hugely successful “Finding Hope and Meaning in Suffering” (which was born out of both a personal crisis and prior academic research in the area) Hughes has now published “The Compassion Quest“, which is an exploration of inter-relatedness and spirituality.

I say inter-relatedness, because although others have described this volume as being about love, Hughes’ thesis is much more subtle. He argues that humanity has been created to be interdependent and to truly know a relational Trinitarian God is to truly discover the call to enter into wider relationships with those around us. But far from the liberal texts that seek so often to use the language of love as an excuse for self-gratification (you know what I’m talking about here), Hughes’ roots inter-relatedness in the sacrifice of desire, the dying to self and the emptying of one’s life into service of others that is the true path of classical spiritual discipleship. The Jesus of The Compassion Quest is not just the preacher of the Parables but also the carrier of the Cross.

That’s what makes The Compassion Quest such a refreshing read. There is no subtle hidden agenda here to promote a revisionist view, to “correct” a current generation on the subject of love. Instead there is a call back to a deep mainstream of Christian practice that has been lost in a social media high-technology society. In the week that has seen the Church lose the wonderful gift of the author Brennan Manning whose seminal text “The Ragamuffin Gospel” has touched the lives of so many, it’s refreshing to read another voice that gets the true simplicity of the Gospel and can articulate it to a modern audience.

And what is the answer to what Trystan did at Wycliffe? Well in his own words,

I soon came to the conclusion that all my waxing lyrical about theology in the previous 15 years was fruitless without practical action. Compassion, after all, is not about words. It is a way of being that is centred on doing.

0 Comments on “Review – The Compassion Quest”