I like Justin Welby. I know that may come as a surprise to some of you, but I like him, I really do. I think he’s a clever, witty, thoughtful,Â orthodox Archbishop who may yet be the best thing to happen to the Church of England in a long time.

So I was utterly flabbergasted to see this press release come out from Lambeth Palace today. 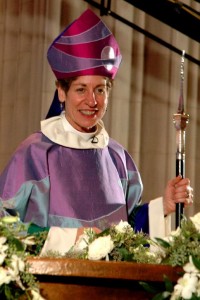 Archbishop Justin has welcomed news that the Presiding Bishop of the Episcopal Church, Bishop Katharine Jefferts Schori, is to be awarded an honorary Doctor of Divinity by the University of Oxford

Archbishop Justin said: “I am delighted by the news that the Most Revd Dr Katharine Jefferts Schori is to receive an honorary Doctor of Divinity from the University of Oxford. This award, richly deserved, reaffirms Bishop Katharineâ€™s remarkable gifts of intellect and compassion, which she has dedicated to the service of Christ.

“Prior to becoming ordained, Bishop Katharine pursued a career in oceanography, and her enduring deep commitment to the environment has evolved into a profound dedication to stewardship of our planet and humankind, especially in relieving poverty and extending the love and hospitality of Christ to those on the edges of society. As Archbishop Desmond Tutu once said of Bishop Katharine, ‘In her version of reality, everything is sacred except sin.’

“It must be noted, too, that Bishop Katharineâ€™s achievements serve â€“ and will continue to serve â€“ as a powerful model for women seeking to pursue their vocations in the church.”

This is a woman who has spent $34 million of Episcopal Church funds on pursuing with litigious venom orthodox clergy who have felt that there was no space for them anymore in TEC. This is a woman who instigated a policy that empty church buildings should be sold to anyoneÂ BUT orthodox Anglicans who had left TEC. She is probably the single person most responsible for all the bitterness and pain currently experienced by Anglicans of both sides in North America.

Compassion? This word used in this way in this press release is like a red rag to the bull of GAFCON. It is a massive slap in the faces of the Primates of Nigeria, Uganda and Kenya, coming so soon after the joint open letter from Canterbury and York. And as for being an intellectual, that is fallacious nonsense – she has a standard ministry degree like many other priests and any doctorates in theology she has received since ordination are purely honourary. She makes basic exegetical errors when preaching and is singularly incapable of affirming basic Christological truths. For the Archbishop to describe her “gifts of intellect and compassion” is ludicrous.

Here’s the thing though. I don’t think Justin wrote this and I suspect he didn’t even see it. He’s just finished off a busy and important tour of Africa, and if he has returned already to London the press team at Lambeth have given us no indication of that fact. But even beyond that there are three key clues that indicate that someone else wrote this and that Justin may not have even seen it before release. The first is simply the political incompetence of the statement coming so soon after the exchange of correspondence between Justin and the GAFCON Archbishops. Given that the Primates gave a clear and gentle signal that they were giving Justin a warning around the area of sexual ethics, to come back within the week with a press statement that to all intents and purposes sticks two fingers up in their face is just extraordinarily inept. That’s not Justin. The joint letter from York and Canterbury is subtle and gentle, this is a slap in the face in full public. That’s not Justin, it’s really not. Justin would have written a one liner congratulating KJS on the award of the DD and nothing else.

Secondly, the statement is full of stock liberal imagery – quoting Archbishop Tutu, “profound dedication to stewardship of our planet and humankind”, “extending love and hospitality”. That’s not Justin.

But third, and it’s the killer, the statement uses one word in particular that is not Justin’s style in the slightest. “Humankind”. That’s not a Justin word at all. Justin Welby refers to collective men and women as “humanity” or simply “human”. Need convincing? See here and here and here and here as brief examples. “Humankind”? Find me an example of Justin using that word and I’ll eat my hat. He certainly doesn’t use it inÂ anyÂ of his speeches or statements on his website and trawling through the first ten pages of a Google search for “Justin Welby humankind” makes me pretty convinced he hasn’t used it anywhere before at all.

“Humankind” was written by someone else. Do you want to know where it came from?

In November Schori was given theÂ Elizabeth Blackwell Award by Hobart and William Smith Colleges. At the presentationÂ President Mark D. Gearan said,

In her career as an oceanographer and today as the Episcopal Church’s presiding bishop, she has shown a remarkable dedication to the stewardship of the environment and to the betterment of humankind. Her work to boost people from poverty and to move the Episcopal Church to a more inclusive status has aided individuals throughout the world and will help preserve the earth for future generations.

Let’s look at that shall we?

The same person who wrote President Gearen’s speech wrote that part of Justin’s statement and the only obvious connection is 815 in New York. If they wrote that bit, how much of the rest of it did they write? I’d start with “intellect and compassion”.

Justin, any time you want to employ your own press statement writer who won’t issue politically dangerous pieces, you know where to find me.

The use of “Wot” in the title is a British cultural reference to something that claims to be spectacular but is actually extraordinarily inept. Go figure.