Close up shot of black and white photographs from the Second World War. Background somber but progressive piano music. 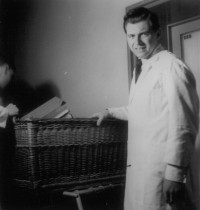 PETER – VOICE OVER : A few months ago my local museum had a show of photographs from the second world war, focussing on some of the atrocities performed by the SS. It was challenging and provocative and moved many people to tears.

Cut to shot of me walking along a beach in bright sunshine.

One photo in particular, of Josef Mengele, the so-called “Angel of Death” doctor, about to experiment on a Jewish child was particularly poignant and made people respond in anger and grief. People would walk away mumbling, “He deserves to burns in hell”. All except one person, who’d stuck a post-it note on the photo which read, “Reality check – Josef Mengele went to heaven in the end”.

Poignant pause whilst focussing on a pineapple. Back to me on a sunny beach, having come to a stop. Straight look at camera.

Mengele’s in heaven? Really? And someone knows this for sure and felt the need to let the rest of us know?

Will only a few select people actually end up in hell for all eternity and will billions and billions of people, despite their rebellion against God and their gross sin, live perfected forever? If that’s the case, how do you end up being one of the few? Does it really not matter in the slightest what you do or say or believe? Is it irrelevant what happens in your heart? Are baptism and conversion totally pointless? And really how despicably evil and loathsome do you have to be to become one of those who will actually have to pay the price for their sin? Is there a list somewhere that can tell me what I can get away with in this life and still get into heaven?

Cut to coconut on beach. Back to Peter

And then there’s the question behind the question, the real question. What is God like? Millions and millions of people have been taught that God’ll take you in the end despite anything you do and regardless of your repentance (or otherwise) in this life. What gets taught is that it really doesn’t matter what you think about Jesus and God and how many people you’ve murdered, because in the end God is really, really, really nice and all that stuff about sin and wrath and judgement and holiness is rubbish.

Cut to cute kid opening can of Lilt. Back to Peter.

How is it that you could possibly think this kind of God is good? How could we possibly ever trust a God who lets people get away with the most abominable crimes? How can we ever trust a God who says one thing in the Bible and then does the exact opposite? Is the “good news” the fact that it doesn’t matter what you do, that you can be as despicable a sinner as you like, a child abusing, murdering, raping, torturing, hedonistic bastard and in the end you’ll get into heaven. And might this explain why loads of people read this rubbish, see how unjust and unholy such a God would be and then say, “Why would I ever want to be a part of that?”

Cut to museum staff talking down photos from exhibition and throwing them into a fire. Pause. Back to Peter.

You see, what we believe about heaven and hell is incredibly important because it exposes what we believe about who God is and what God is like. What we discover in the Bible is more unexpected and surprising and beautiful than whatever we’ve been told and taught by populist preachers. The good news is that God is a God who will judge evil and sin and will not let his creation get away with the most despicable of acts, but at the same time he has sent his Son to die for those who realise that they are also the worst of sinners and could never ever in any possible fictitious scenario deserve to go to heaven. We don’t have to choose between a God of love or a God of justice – we can have both in Jesus Christ. Jesus’ death and resurrection mean that God is vindicated as a God of justice and holiness in judging evil and sin and he is also vindicated as a God of love and holiness in graciously saving all who call on the name of Christ.

The good news is that God wins.

Right – Who’s got a publishing contract, a film camera and two tickets to the Bahamas?

19 Comments on “A Promo Video Proposal”