Review – Evangelical Faith and the Challenge of Historical Criticism 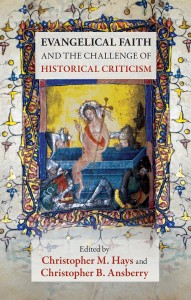 It’s not the most punchy of titles, butÂ Evangelical Faith and the Challenge of Historical Criticism is a feisty tome examining some key critical questions of Scripture from an Evangelical perspective (clue’s in the title). In a series of essays edited by Hays and Ansberry conservative scholars explore issues like the historicity of Adam and its effect on the notion of original sin, whether the Exodus happened, was their a notion of “covenant” for the Jews before the exile and other quandaries much favoured for the setting of exam questions to test Old Testament undergraduates.

None of the essays provide definitive answers but they do supply an opening examination of the issues involved. The chapter on Adam never really gets to grips satisfactorily withÂ the question posed but by contrast the essay on the Prophets gives a great explanation of the subtlety of prophecy and a defence against critics who take a too literal perspective on what is actually a deeper literary genre.

Perhaps the greatest strengths of the book are the suggested readings at the end of each essay and the final exploration of “Faithful Criticism and a Critical Faith”. Here the editors really play to their strengths and in under 20 pages gave us a robust and challenging call to engage with the best of Biblical criticism in our endeavours to truly understand what God did and is saying through his inspired word.

Do Buy ifâ€¦Â you want to begin to explore issues of historical biblical criticism in an evangelical environment
Donâ€™t Buy ifâ€¦Â the combination of the words “Second”, “Third” and “Isaiah” cause you to look frantically for your heart attack pills