In the fresh light of day, the letter from Martin Dudley to the Bishop of London reveals where the disciplinary process arrived at and what implications that has for us in our understanding of what the actual outcome of this event is. 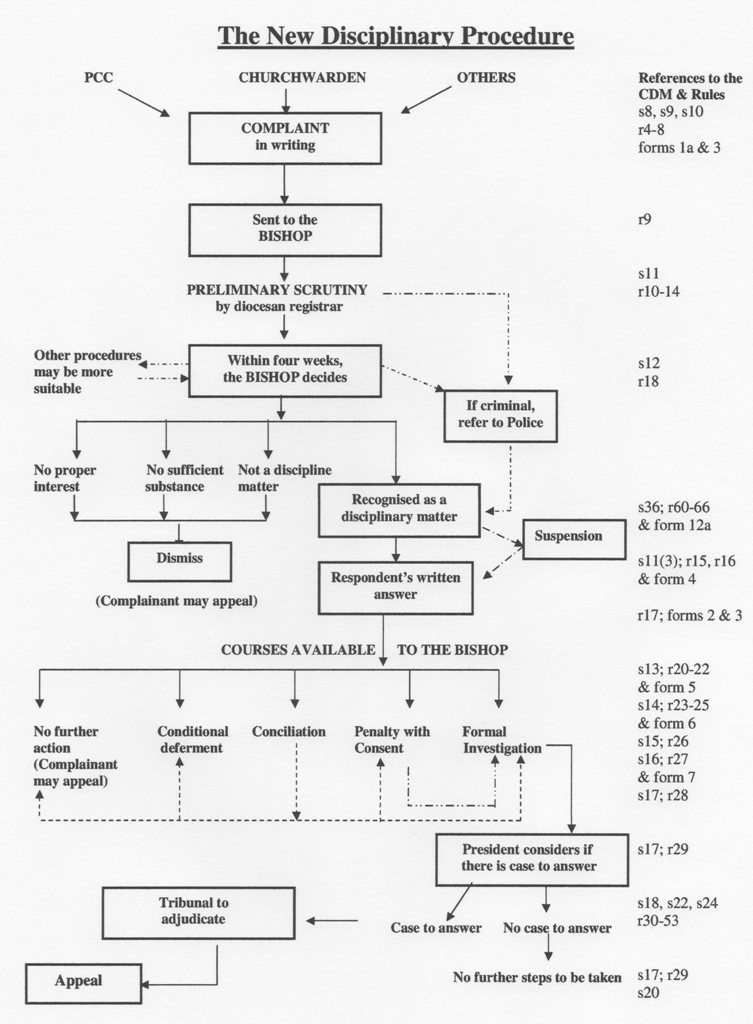 To the right you’ll see a diagram of the disciplinary process in the Chuch of England. You can click on it to bring up a larger version so you can follow what has happened in the past few months.

On the 18th of June Richard Chartres wrote to Martin Dudley and warned him of the following:

I have already asked the Archdeacon of London to commence the investigation and I shall be referring the matter to the Chancellor of the Diocese. Before I do this, I am giving you an opportunity to make representations to me direct.

This is the "Preliminary Scrutiny" which is in the diagram. Martin Dudley’s letter, which was released yesterday, is dated the 21st of July, over a month later. The date of this letter raises the issue as to what the letter constitutes in the disciplinary process. It is evident from the the reports yesterday that the Archdeacon and the Chancellor of the Diocese reported back to the Bishop of London, for any failure to do so would have been a breach of the disciplinary procedures.

But where does Dudley’s letter fit into the process? If you read the letter as a reply to the Bishop’s initial request prior to his instructing of the Archdeacon and Chancellor to investigate, then the dropping of the case constitutes one of the three courses of action on the left hand side of the chart, all of which lead to a dismissal of the case. Here is the wording of the Measure:

(1) When a complaint in writing has been made in accordance with section 10 above it shall be referred in the first instance to the registrar of the diocese or province concerned, as the case may be, who shall thereupon scrutinise the complaint in consultation with the complainant with a view to—

(a) forming a view as to whether or not the parochial church council or other person making the complaint has a proper interest in doing so or, if the complainant purports to be a churchwarden, establishing that he is such, and

(b) forming a view as to whether or not there is sufficient substance in the complaint to justify proceeding with it in accordance with the following provisions of this Measure,

and the registrar shall notify the respondent that the complaint has been referred to him.

Provided that the period of twenty-eight days referred to above shall not be extended as aforesaid more than once.

(3) On receipt of the registrar’s report the bishop may dismiss the complaint and, if he does so, he shall give written notice of the dismissal to the complainant and the respondent, together with a copy of the report.

(5) Where the registrar proposes to extend the period of twenty-eight days referred to in subsection (2) above, he shall, before doing so, consult the complainant and the respondent.

(6) The registrar may delegate any or all of his functions under this section to such person as he may designate.

However, the alternative reading of events is to view Dudley’s reply as the formal written answer to the Bishop’s formal recognition of the matter as a disciplinary event. In this case, sections 12 and 13 of the Measure are the operative clauses:

(1) If the complaint is not dismissed under section 11(3) above the bishop shall, within the period of twenty-eight days following the receipt by him of the registrar’s report under section 11(2) above or the president of tribunal’s direction under section 11(4), as the case may be, or such longer period as he considers to be justified in the particular circumstances of the case, determine which of the following courses is to be pursued—

(a) he may take no further action, in which case the provisions of section 13 below apply; or

(b) he may, if the respondent consents, direct that the matter remain on the record conditionally, in which case the provisions of section 14 below apply; or

(c) he may direct that an attempt to bring about conciliation in accordance with section 15 below is to be made; or

(d) he may impose a penalty by consent in accordance with section 16 below; or

(e) he may direct that the complaint is to be formally investigated in accordance with section 17 below.

(2) Where the bishop proposes to extend the period of twenty-eight days referred to in subsection (1) above he shall, before doing so, consult the complainant and the respondent.

(1) Where the bishop determines that there is to be no further action the following provisions of this section shall apply.

(2) The bishop shall reduce his determination to writing and shall give a copy of it to the complainant and the respondent.

(3) The complainant may refer the complaint to the president of tribunals and, if the president considers that the bishop’s determination was plainly wrong, he may direct the bishop to pursue such of the courses specified in section 12(1)(b) to (e) above as he considers appropriate, in which case the bishop shall proceed accordingly.

I believe that if this second possibility is the correct interpretation of the placing of the letter in the sequence of events, then the Bishop has chosen to "take no further action", as opposed to viewing this as "conciliation".

It strikes me that the second of these alternatives (that we have concluded at section 12 and 13 of the measure, rather than section 11) is the correct reading, given that the Bishop communicated to Dudley that if he didn’t allow publication of the letter, "I shall also have to say that this may not be the end of the matter." Such a threat seems to imply that the Bishop would impose a penalty upon Dudley which implies that he was operating as though he was in section 12, not section 11.

This is further apparent when reading Bishop Pete Broadbent’s ad clerum from yesterday:

I am contacting you all on Bishop Richard’s behalf since, as you know, he is currently away on holiday.

Earlier this year, the Bishop wrote to you regarding a service held at St Bartholomew the Great on May 31st, which had generated considerable publicity and consternation.

Since this time, under the Bishop’s instructions, the Archdeacon of London has carried out an investigation into the matter, alongside the Chancellor of the Diocese. This has involved a series of frank discussions with the Rector, Revd Dr Martin Dudley.

As a consequence, the Rector has made expressly clear his regret over what happened at St Bartholomew the Great and accepted the service should not have taken place. Bishop Richard has considered the matter and has decided to accept the Rector’s apology in full. The matter is therefore now closed.

So where does that leave us?

Well, firstly there is the matter of the complainant. I am not aware as to who Richard Chartres received the formal complaint from, but he or she should by now have received a copy of the Bishop’s report. Whether the process concluded at section 11 or 12, the complainant has a right to appeal. That means that we may not have heard the last of this. If anybody knows who the formal complainant actually is, do let us know!!!!

Secondly, the fact that the process appears to have concluded at section 12 and 13, and given that the Bishop threatened to take further action against Dudley were he not to permit his letter to be published, implies that despite the paucity of an apology in Dudley’s letter (regret rather than repent – where have we heard that before) it is very clear from the disciplinary procedure that what Dudley did was wrong. The key to the interpretation of the letter is this sentence:

The implication is clear. What Chartres is threatening is not just action against Dudley, but action against anybody who now performs any form of blessing of a civil partnership (i.e. to equivalate it in any way to a marriage). The ruling, despite taking no action, is that the service was utterly incorrect (though one could argue whether incorrect ecclesiastically or theologically) and that any repeat anywhere in the Diocese will meet a much harsher fate than Dudley did. In this sense, despite the fact that the lynch mob did not get its victim, the case is a clear success for the conservative lobby.

Of course, these kind of blessings go on more than we think in the Diocese of London, but for the first time a clear marker has been laid that they should not take place, and that if the Bishop (and the public) gets to hear about any in the future (let the reader understand) then those presiding or taking part would incur the wrath of the Lord Bishop of London.